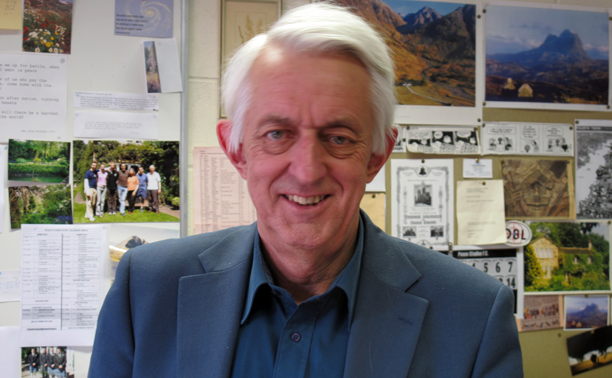 Tim Willmott speaks with Prof. Paul Rogers of the world renowned Department of Peace Studies at Bradford University. Paul worked originally in the biological and environmental sciences, but has worked for the past 30 years on international security, especially in relation to political violence and western security policy. He is a consultant to Oxford Research Group , an independent UK think tank, and also writes a weekly analysis of international security issues for www.opendemocracy.net. Of his 26 books, the most recent is Global Security and the War on Terror: Elite Power and the Illusion of Control.

A third edition of Losing Control: Global Security in the 21st Century

was published in April 2010 by Pluto Press. His work has been translated into many languages and he is a regular broadcaster on BBC World Service, Radio France International and other networks.

The interview considers the impact of climate change on global stability, but there is another dimension to this: Consider how unsustainable, economically, environmentally and socially, war zones are. Apart from the military-industrial complex, who gains? Who in a war zone remembers to recycle their cardboard?

TW: Can you tell me something about the School?
The Department of Peace Studies was established over 35 years ago, initially a Quaker initiative. It’s expanded slowly but steadily over the last 20 years, and it’s now the world’s largest university centre for peace studies. I try to do broad brush work on the changing causes of international insecurity and the way that it is going to be so crucial to move towards what people are now starting to call sustainable security.

I was very interested that you used the phrase ‘sustainable security’. What do you mean by that?
Sustainable security looks at a series of linked global issues, and the analysis in brief is that there are four broad drivers of potential insecurity.

The first is that the world has evolved into a system in which about one fifths of the world’s population has the great majority of the wealth. If you take annual income, for example, then approximately 20% of the population has about 84% of the income, and that has got worse over the last 30 years. It’s not just rich country – poor country, there are 100m pretty wealthy people in China, probably that many in India, 20m or so in Brazil, and in contrast you have huge pockets of poverty in countries like Britain and the United States.

The second issue, which is one of the huge successes of the last 40 years, has been massive improvements in education, communications and literacy. But that means that you have a new generation of the majority on the margins who are much more aware of their own marginalisation. The revolution of rising expectations of the 1970’s is now the revolution of frustrated expectations. So you’re getting what you might call the revolution from the margins, and it’s happening across the world, it’s largely unrecognised as a worldwide phenomenon, but it is a necessary consequence of the division between rich and poor and of the knowledge of the division. So that’s the second one. A divided world, a world which knows about its own divisions.

The third one is, inevitably, environmental constraints. We have 30% of the world’s gas and 62% of the world’s oil in and around the Persian Gulf, and that goes a long way to explaining the constant problems there. We have all the problems of water and the rest but the killer is climate change. But the point is that the people who are going to be most affected by climate change do not have the wealth to even begin to cope. You put those three factors together and you get a very dangerous situation unless we make the changes.

And then the final issue, which is that our global security policy is essentially about maintaining the status quo. The word I have coined for this is ‘lidism’. You keep a lid on things, you don’t go through the underlying problems. Many military think-tanks now believe that climate change, poverty, marginalised people and migration are the big security issues, but from their perspective quite naturally they are actually about preserving their own countries and the security of their countries – they don’t look globally, they don’t look long-term. So we have this combination of a divided knowledgeable world which is facing environmental constraints where the world’s elite (over a billion people) sees the challenge as maintaining the status quo. That is totally impossible. You cannot close the castle gates in a globalised world. The 9/11 hijackers used craft knives to turn planes into weapons. You cannot do it. And some thoughtful military people know this. But it requires a huge change in the thinking.

So sustainable security is about making sure that you have a secure world which is actually built on much greater equality and sustainability, and gets to the roots of the problems which are going to develop.

What specific threats do you see to peace in general – to civil society – that could directly come from some of the effects of climate change? What are the threats?
Well I think there are a number, obviously as climate change has a greater impact on the poor and most populous parts of the world. Where people produce a great deal of their own food locally then the ecological carrying capacity of the land will decline at a time of rising demand. It sets up much greater migratory pressures as people need (not want but need), to move to somewhere where they might live better. More generally I think, and this is always predicated on not making the changes, there is likely to be a much greater problem with weak, fragile and failing states. And there will be a very strong reaction from people who are on the margins, some of whom will become very much more radicalised. So I would think there is the risk of desperate social movements, which may be very brutal, and that they will be put down very firmly. So it is always the combination of climate change as a form of environmental constraint in a world which is already very divided that causes the problems.

Can you think of examples of things that are actually going right at the moment?
I think there are huge examples. In spite of the problem of Copenhagen there is much greater knowledge among a core group of people of the issue of climate change, and we’ve moved beyond the Bush era of denial by leading governments. There are all kinds of things happening on the renewable energy side right across the board. There’s a lot of questioning about the failure of the globalised free market. And then right down to the local level – Transition Towns and many many other examples across the world. There’s a lot going on out there but we’re in the early stages and everything has to accelerate – it has to happen much faster.

In your field is there any evidence of a more enlightened, nuanced, subtle approach amongst the people who actually make a difference to all of this?
Here and there. You can see the first steps being taken. When you get the national security strategy which this government published about a year ago, or indeed the green papers that have come both from Labour and the Conservatives, they both of them now say climate change is a big security issue – migration of poverty and social dishesion are major issues. They don’t follow it through – but at least they’ve taken the first step.

So what should be done?
Well we’ve got a pretty good idea of how to create a fairer international trading system We’re getting better ideas about how early developing societies can develop in different ways and still have high standards of living. We now have a clear idea of the critical importance of moving rapidly to low-carbon economies and how we might do it. We’re beginning to think through the ideas of sustainable security and getting away from this dreaded old thinking which sees everything as a matter of military control. In all sorts of ways we’re beginning to know how to do it – but making the transition is going to be very tough.

The role of education

What is the role of Education in all of this?
I think you have to help younger people open up their minds to what is possible. Education is incredibly important and I think one of the responsibilities, particularly at first and middle school level, is for the schools themselves to demonstrate it.

I am absolutely astonished that this government has put so much money into replacing worn out old schools, but haven’t taken the opportunity to mandate that these new schools should be living, breathing laboratories.
Here and there a few local authorities have done it. That the government has not facilitated it is astonishing.

Bottom-up or top-down? Do the leaders of the world change it or do the people?
I think it has to be both, no question.

Are you optimistic or pessimistic about the prospects for global society?
I’m optimistic. But the next 5, at most 10 years, are going to be crucial. I think there’s everything to play for.

And how do you think that will play out? What’s going to happen to confirm your optimism?
I think there probably will be some major, very big, defining problems, which will wake people up, I just hope they’re not catastrophic. But the other cause for optimism is that I think there is enough evidence that change is starting to happen and the new thinking is starting to come through.

I ask the question because I have this terrific fear of a dystopian future. I look at the neocons and suchlike. I can just see this scenario where they deny and deny until it’s so late that the only response there is, is a fortress. A fascist response?
That I would agree is the biggest single danger, that we retreat into our fortresses not realising we cannot do this, which is actually one of the reasons I’ve put a lot of effort in the work I’ve done on analysing the appalling failures of the war on terror. That’s a classic example of the crush response. And it’s been disastrous.

What do you think is the most appropriate response to the climate change sceptics, because there’s no question they’ve got the movement very much on the back foot?
The most appropriate response is to refer to the basic science of climate change and what it is showing. To have relatively simple but factually accurate messages of what is actually happening, with just a handful of more or less irrefutable examples. I think it’s fairly short-term. They’ve had a very happy confluence of things. This last January it was very difficult to tell people it was actually the warmest January in 30 years globally, because for Western Europe it wasn’t. But Alaskans had something approaching a heat-wave. And I actually think that Climategate might turn out to be not so disastrous as we thought. Climategate will mean that the science will be more robust.

I’m still planning my run of t-shirts that has got ‘Climate isn’t weather’ written on it…
I know – ‘Climate is long-term weather, weather is short-term climate’. I think we just have to weather it, and we’ll come through.

You can get a copy of the full interview by contacting us here.