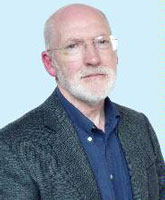 Bill Scott is Emeritus Professor of Education at the University of Bath where he was head of its Education and Sustainability research programme, director of the Centre for Research in Education and the Environment, and a deputy-director of the University’s Institute for Sustainable Energy and the Environment. He was a founding editor of the journal Environmental Education Research, is a Fellow of the Royal Society of Arts, a director of the community interest company South West Learning for Sustainability Coalition, the Forest of Avon Trust, and the Wiltshire Wildlife Trust. He is Chair of the UK National Commission for Unesco’s ESD Co-ordinating Group, is a member of Hefce’s sustainable development steering group, and a member of the Higher Education Academy’s advisory group on education for sustainable development.

TW: How important is climate change in the public awareness of sustainability?
I see it as a bit of a threat. It is so much emphasised that it tends to divert attention from other aspects of sustainability. And it’s dominant even before you add in the controversies. But from an educator’s point of view of course controversy is very helpful as it provides a ready purchase on issues.

But when people talk about trying to invent something called ‘education for climate change’ then you know that there’s a problem because it is only one aspect, okay potentially a pretty serious aspect, but so is species loss. Lose a key species in a food chain or you risk running out of genetic variation … that’s pretty disastrous too. But you can’t ignore climate change, in part because so much of our economic policy is being geared towards it.

And I guess that’s because it’s seen predominately as a presenting economic threat?
Yes. Ultimately it’s an existential threat as well because if the climate does run away with itself because the positive feedback that the models suggest turns out to be correct… then we could be looking at huge temperature rises… Yes, I think we’re almost beyond economics here if all that goes really wrong.

Would you choose to refute the climate change deniers or would you say they are doing a very good public service? Specifically the furore about IPCC and before that the non-agreement at Copenhagen. What would your response be to that?

It’s really neither here nor there what I think, as a non-expert, but I broadly accept the scientific consensus. However, I do believe in open discussion and in ideas being robustly tested in the public domain, so it would be an odd business if everybody who thought there was a problem kept quiet. And I don’t think it would be good. But once you adopt that liberal view, it’s hard to control.

You can’t really influence how responsible or irresponsible the (so called) sceptics are, nor how the non-sceptics react to criticism. And I don’t give much credit to how the IPCC has managed its public face. It could be much better at explaining what it does, at saying why this is important and at explaining uncertainties in data and the assumptions being made. I just think it should be more trusting of the public’s intelligence.

All the people i’ve interviewed so far happen to be academics and every one of them has said exactly the same thing – presentation, and the marshalling of proper thought-out argument is what’s needed?
Yes. I have to say I groaned when I saw the University of East Anglia’s hapless response to so-called Climategate.

Do you think there’s anything positive coming out of climate change at the moment?
Well in terms of school and education and helping people learn more generally, there does seem to be a broad recognition that we need some good, positive stories. Because positive stories inspire people, negative stories don’t… I suppose you would say that if climate change is as serious as the scientists seem to make out, we need more discussion not less. This current government doesn’t seem to talk the same talk as it did in opposition.

Are there any opportunities presented by this? Again we’re talking specifically about climate change, and again I could put forward an view that it’s an access argument – it raises awareness of other issues?
Well that is the argument about the eight doorways that the last government suggested as entry points into a discussion of sustainability in the school and its community.  The argument being you could choose the doorway that most suited your interests or expertise, but you finished up in the same place thinking about sustainability from a range of viewpoints.

You’re absolutely right in terms of opportunity in a hard-nosed sense. In universities, the availability of research grants has increased particularly in science and engineering, because the de-carbonising agenda is making demands on engines and power systems, electricity transmission systems, and the like. I think we’re going to see our energy structure and the transport system transformed in time. It’s a question of how fast, and whether it’s British technology that gets used.

And that’s true also in the social sciences where similar research opportunities occur. The University of Bath has a significant proportion of its research with some kind of sustainability focus.

And that would be true of all universities?
I’m sure every university has a sustainability focus – it’s particularly true I’d imagine of science and engineering at universities. And there’s also an opportunity to think through the curriculum where the Higher Education Academy, and the National Union of Students are doing a particularly good job. So universities have over a ten year period become rather focussed on sustainability – socially, environmentally, and economically. And schools too, of course, where it’s a great opportunity to think about the future. So good news stories are important, bringing opportunities for critical discussion. However, if you insist on doom and gloom then you can find an excuse for emphasising that. It’s too easy isn’t it

I always ask the top-down vs bottom-up question and it feels to me that where you’re engaged is in the top-down bit, is that true or not?.
No, I don’t think that’s right. The Sustainable Schools initiative from what used to be the DCSF was for me a pretty good piece of framing that said to the schools sector ‘the government thinks that this is important, here’s a way of thinking about it, here’s some things you can do, a whole bunch of people out there in the community will help you do this, here’s the educational argument for it, the social argument – over to you’.

The HE funding council did something equivalent but with much more stress on carbon and biodiversity and transport – they’re not allowed to talk about curriculum, but the Higher Education Academy is, so they between them they did. But if that’s all you’ve got then nothing much would happen without a lot of people on the ground in schools, colleges and universities, individuals groups, and NGOs all plugging away. And being able to do so because the enabling framework is there. So our research centre is interested in the policy process and we follow and comment on that one way or another. We’re interested in practical things – what schools and universities do, what teachers and students get up to, in a whole host of ways. We’re interested in the interface between policy and practice, and how they influence each other. And we just try to be helpful.

What prompts that question is the lack of agreement at Copenhagen. In my view, the very predictable fact that they didn’t actually come up with any cohesive idea or strategy leaves an opportunity space of the common citizen to fill, and by filling it exert pressure?
Well it’s an imperative isn’t it?

I’m beguiled as an outsider at the idea of the school being a community hub, or more of a community hub than it is now. In Southern India, for example, schools absolutely are that. They’re great dynamos of community cohesion and community-based learning, and one of the things I saw there is the impossibility of having a sustainable school in isolation; an island in a sea of business as usual. And I think that’s a fantastic opportunity.
And the notion of a community school which has rather more permeable boundaries, physical and psychological, than schools usually have – it’s not an entirely new idea here but like a lot of English education ideas we don’t get too enthusiastic about them. But there are some schools that take these ideas very seriously and which have transformed themselves.

And do those schools really become ‘role models’ or just carry on doing their little bit of pioneering work?
Well people certainly try to help them become role models but they probably don’t want to be seen in that way. They would probably see themselves as places where there’s some interesting practice, and that’s how I would think about them too. Role models are a funny idea anyway – too much of a moral overtone to ‘role model’ in the way we normally talk about it. If you’re keen on this and you’re effective you’ll find yourself with opportunities to speak at events and the like, and present what you’re doing. And all of that’s good, and critical case studies flowing from that are good because we need to know more about what they do.

And we need to know more about how what they do is possible. That’s the biggest barrier normally – people “knowing” that it can’t be done. But there is convincing evidence that children like thinking about sustainability, and they get a lot of satisfaction out of it – including a sense of hope.

Final question – on balance are you optimistic or pessimistic about the prospects for a global society?
A E Housman said that optimism and pessimism are both morally degenerate states and that, if anything, optimism was the more deplorable. He described himself as a meliorist – George Eliot was as well – and meliorists simply know that if people of good will get together then all kinds of things become possible. I know that too.

You can get a copy of the full interview by contacting us here.