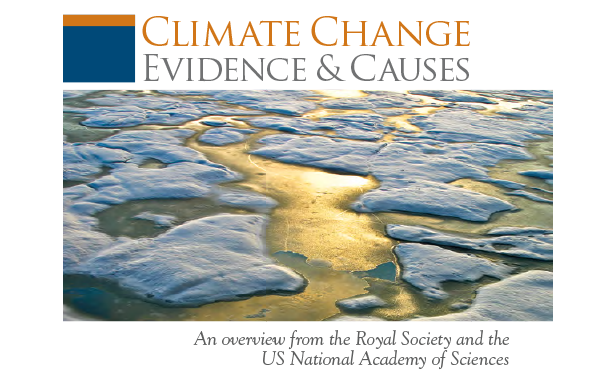 The Royal Society and the US National Academy of Sciences, with their similar missions to promote the use of science to benefit society and to inform critical policy debates, have today released  “Climate Change: Evidence & Causes”, a new publication as a key reference document for decision makers, policy makers, educators, and other individuals seeking authoritative answers about the current state of climate change science.

The publication makes clear what is well established, where consensus is growing, and where there is still uncertainty. It is written and reviewed by a UK-US team of leading climate scientists. It echoes and builds upon the long history of climate-related work from both national science academies, as well as the newest climate change assessment from the United Nations’ Intergovernmental Panel on Climate Change.

As the editorial in The Independent puts it, “To the rational majority, climate change is not an article of faith but an unwelcome statement of fact. Not because of the anecdotal evidence of unprecedented “weather events” – Australian heatwaves, Philippines typhoons, European flooding – battering the globe with steadily increasing regularity. Rather, because scientific study after scientific study has proved beyond all reasonable doubt that not only is the Earth’s temperature rising, but those alterations are almost certainly the result of human activities. Indeed, the Intergovernmental Panel on Climate Change concluded last year that it is now as sure that we are behind global warming as it is that cigarettes cause cancer.”

“Yet still there are those who claim climate change can somehow be seen as a political position, instead of the demonstrably measurable reality that it is. And even among policymakers who do not quibble with the evidence, there is a reluctance to face up to the expensive, unpopular choices that must be made to solve the problem. It is against such a backdrop that two of the world’s most august scientific institutions – the US National Academy of Sciences and the Royal Society in London – today set out their summation of the proof that climate change exists and that human activities are the cause. The motivation could not be more explicit. “We have enough evidence to warrant action being taken,” Sir Paul Nurse, the President of the Royal Society, says. “It is now time for the public debate to move forward.”

Now perhaps we can drop this sterile  – and highly politicised – debate and focus on what we do about it. It’s about time.