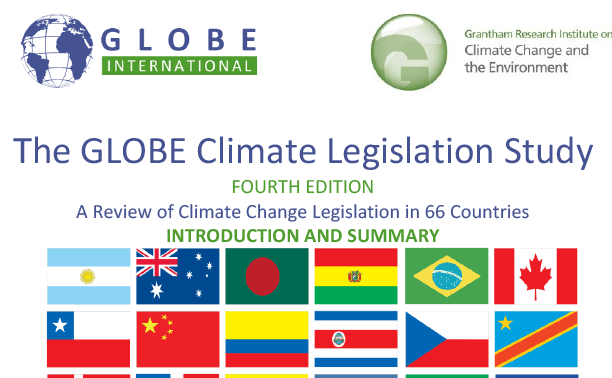 On 27 February 2014, the Global Legislators Organisation (GLOBE International) released the 4th edition of the GLOBE Climate Legislation Study – produced in partnership with the Grantham Research Institute at the London School of Economics.

The Study is the most comprehensive audit of climate legislation across 66 countries, together responsible for around 88% of global manmade greenhouse gas emissions. The new study (4th edition) was formally launched at the 2nd GLOBE Climate Legislation Summit held at the Senate of the United States of America and at the World Bank, Washington D.C.

In the introduction to the report, GLOBE International’s President, The Rt Hon. John Gummer, Lord Deben, says, “The 4th edition has been expanded from 33 to 66 countries (including the European Union as a single entity), which are together responsible for approximately 88% of global emissions of greenhouse gases.

“With its broader coverage and deeper analysis, the 4th edition shows more clearly than ever before the extent and breadth of the legislative activity on climate change. It’s happening across the globe: in Africa, the Americas, Asia and Europe and in both large and small economies from China to Micronesia.

“The study shows that 61 out of 66 countries have passed laws to promote domestic, clean sources of energy and 54 have legislated to increase energy efficiency. The former reduces reliance on imported fossil fuels, thereby mitigating exposure to volatile fossil fuel prices and increasing energy security. The latter reduces costs and increases competitiveness. All of these actions, whilst being driven by national interest, have a positive benefit for the world’s climate. And it’s no surprise, either, that 52 of the 66 countries covered by the study have developed legislation or policies to improve their resilience to the impacts of climate change, many of which we are already experiencing.”

The Global Legislators Organisation (GLOBE International) is a non-party political organisation that supports legislators through national chapters to develop and advance laws on climate change, natural capital accounting and forests.

The 700 page study reviews almost 500 pieces of legislation that have been passed in the 66 study countries.