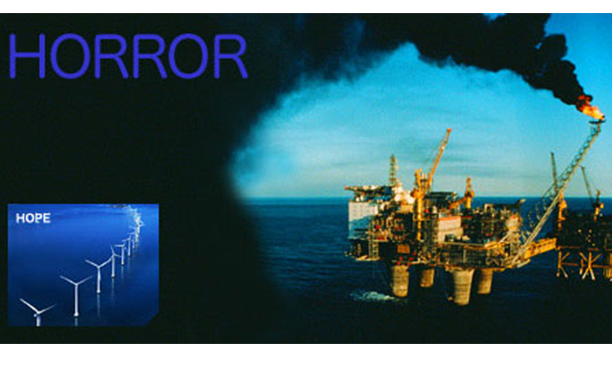 By burning fossil fuels, human interference in the natural carbon cycle has increased carbon dioxide in the atmosphere from 285 parts per million (ppmv) to 365 since 1850. The current total of 6 billion metric tons of carbon must be reduced by two thirds if concentrations are to be stabilised below 500 ppmv.

Various studies suggest that 550 ppmv, a doubling of pre-industrial levels, is an upper limit which cannot be exceeded without triggering a series of positive feedback loops, like releasing methane stored as hydrates in the tundra and ocean floors, thereby leading to runaway climate change. This would require a country like the UK to reduce greenhouse emissions by a factor of 7.

Americans spend $500 billion on energy each year; their per capita consumption is 5 times that of any other nation.

During the course of one year, BP spent more on developing their eco-friendly logo than on renewable energy.

Air conditioning accounts for 16% of electricity use in the US, costing more than the combined GDP of 42 African countries.

Two billion people rely on wood and charcoal for their cooking needs and population growth combined with the inefficient conversion of wood to charcoal means that annual consumption is outstripping forest regeneration.

Appliances on standby use 10% of UK household electricity.

The year 2010 is almost certain to rank in the top 3 warmest yearssince the beginning of instrumental climate records in 1850, according to data sources compiled by the World Meteorological Organization (WMO). Over the ten years from 2001 to 2010, global temperatures have averaged the highest value ever recorded for a 10-year period.

The Ward Hunt Ice Shelf, the largest remaining ice shelf in the northern hemisphere, has broken into pieces over the last two years. This was once part of a more extensive shelf which has shrunk by 90% in the last century.

If just one sixth of the West Antarctic ice sheet melts, the resulting one-metre sea level rise would swamp 30% of the world’s total crop land.