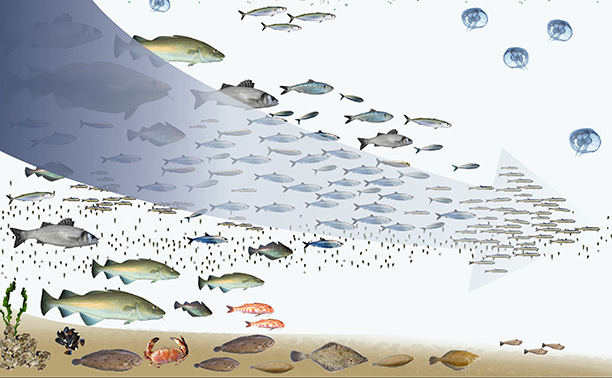 The world’s ocean ecosystems will suffer warming, increased acidity, low oxygen and reduced primary food supply as a result of rising CO2 and this is likely to have dramatic environmental and social impacts, a new study concludes. It predicts that the most vulnerable low-income countries, where 870 million people are dependent on marine ecosystems, would be affected if CO2 emissions are not tackled.

Atmospheric CO2 has already risen from pre-industrial levels of 220 ppm (parts per million) to about 400 ppm, and is predicted to reach between 550 and 900 ppm by 2100. Increasing CO2 causes acidification of the oceans, which has varied impacts, for example, it prevents marine species from building shells. Rising temperatures, as a result of the CO2-driven greenhouse effect, can reduce oxygen levels and affect the primary food supply, with severe consequences all the way up the marine food chain. There is now an urgent need to understand how these effects may act in combination.

In this study, researchers examined the combined effects of acidification, warming, oxygen depletion, and changes to the primary food supply on marine ecosystems worldwide. The researchers used ‘Earth Systems Models’ which are part of the assessment by the Intergovernmental Panel on Climate Change. Predictions were based on one of two scenarios: (i) ‘business-as-usual’, where CO2 emissions continue unchecked and (ii) co-ordinated, rapid CO2 mitigation.

Both models predicted that by 2100, over 99% of the world’s oceans will be affected by acidification, warming, oxygen depletion, changes to the primary food supply or by a combination of these factors. Almost nowhere was predicted to experience reduced acidity or temperatures, and only very small areas at the poles were predicted to experience increased oxygen availability and primary food supply.

Assessing the impacts of all these changes on marine species, the researchers found that the largest changes will occur in shallower waters, affecting habitats such as coral reefs and seagrass beds. Changes were predicted to be smaller for deep-sea habitats, but the researchers note that deep-sea organisms are specialised for stable environments and may be less able to adapt. Biodiversity hotspots for krill (a crucial component of polar ecosystems), whales, dolphins and seals were the worst affected by these ocean changes.

This may also cause socio-economic problems. The researchers used the results to assess the subsequent impacts on jobs, revenue and food to give a broad measure of different countries’ dependency on marine ecosystems. Under the rapid mitigation scenario, 690 million people living in countries with medium to high dependence on marine ecosystems would experience medium to high changes to acidification or warming, etc.

Worryingly, around 470 million of these people live in low-income countries, which are generally less able to adapt to such socioeconomic impacts. The situation under business-as-usual was even more dramatic: there were 870 million people in low-income countries with a relatively high dependence on marine ecosystems and a relatively high likelihood of substantial ocean changes.