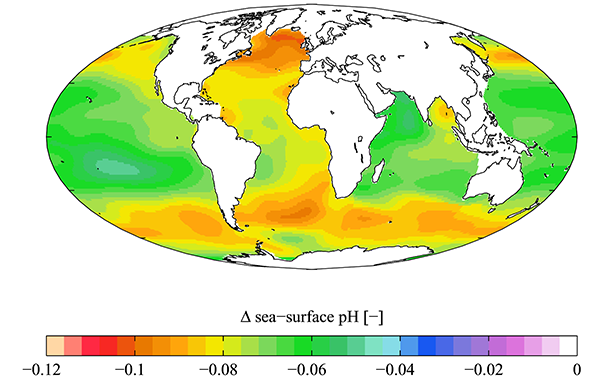 What happens to our oceans determines climate. And what is happening is very scary. Read this to find out why.

When Tim Willmott spoke to Prof. Philip (Chris) Reid of the Marine Observatory in Plymouth in 2009, Prof. Reid was Professor of Oceanography at the Marine Institute of the University of Plymouth; Senior Research Fellow at the Sir Alister Hardy Foundation for Ocean Science; and Honorary Fellow of the Marine Biological Association of the UK. In December 2009 Chris published a major report on the ‘Impacts of the Ocean on Climate Change’ in Advances in Marine Biology.

TW: Is global warming happening?
When you look at a plot of global surface temperature it’s easy to see what’s happening. You can see a very pronounced upward rise in temperature since 1880. It did drop down a little bit in 2008 but that’s due to natural variability and there’s no doubt that we’re on an upward path – it’s a very steep rise – and you can’t explain it in any other way than by incorporating greenhouse gases into the model. There’s no doubt that something really dramatic is taking place.

What other evidence is there?
There are the oceans, which are the major repository of the heat in the world. When you recognise it takes about 4,000 times more energy to heat one litre of water than it does air, and you realise now that the oceans are warming right down to the bottom of deep water, more than 3,000 metres, it’s clear that something’s up. We also know that the hydrological cycle, all the water in the world, is also changing extremely rapidly and the resulting change in the ocean’s salinity is very clear.

There is no real attempt to reduce CO2 in the atmosphere by any country in the world in a way that is going to change what is happening,and what is particularly worrying about this is that levels of atmospheric carbon are at the highest predicted level, some of them above the maximum projection. The level of CO2 going into the atmosphere is actually above all the different models of where we could be according to the different IPCC scenarios, showing you what a serious situation we’re in.

So what’s the consequence of this?
Well one of the things that I think is clear, is that we’re going to see a lot more forest fires than we’ve seen in the past, particularly in this northern part of the world where you’ve got boreal forests – more of those are going to go up as the temperatures rise and the soil dries out in the summer.

Sea level rise is a clear outcome. Probably we’ll only see a metre rise and that’s the projection in the next 100 years, but it could be more than that.

A metre rise – most of the Maldives, for example, will be under the sea.
I don’t think there’s any doubt that will happen – the Maldives are going to be in real trouble. But they are also on coral which is under huge stress because of acidification so I think they’ve got a double whammy in the Maldives really.

What about ice sheets?
In western Antarctica seawater is coming underneath the ice. It’s way, way below sea level so if this water continues to penetrate there’s real danger of collapse and ice sheets disappearing much more quickly than people predict. One scientist said to me that the difference in temperature of the seawater and the temperature in the ice is equivalent to a dragon blowing flames at the ice, the contrast in temperature is so huge.

And there’s more?
Another thing that is on the horizon are methane and permafrosts and hydrates. We know that there is a lot of methane in the perma-frost which is coming out because of the melting of the permafrost. If it’s a consequence of the Arctic warming up then it’s a serious problem because large amounts of methane could come out.

The other consequence to the world is transarctic migration of plankton species which has come back into the north Atlantic for the first time in 800,000 years, which suggests that something pretty serious is happening.

Does it have a knock-on effect on fish stocks?
On everything – the whole composition. All the organisms that are living in the north Atlantic could well be impacted by all these species coming in and competing with them. Some of them aren’t going to survive if that happens, and this could have an effect on the entire food chain.

And changes to the weather?
That’s almost certainly going to happen. There will be drought, an increase in floods and tropical cyclones as it gets warmer. We’re already seeing drought which seems to be getting worse in the whole of Southern Australia and in the Mediterranean region. The other thing is that the changes aren’t going to take place just gradually throughout time.

You mean that when you get a state change it’s not gradual, it’s a flip, it will go quickly to the new stable state?
A system change, yes. Which is what we’re seeing, and we’ve seen it with the data from the continuous plankton recorder very, very clearly. I’m seeing this change in everything I look at now.

Almost certainly we’re going to lose huge numbers of species – they’re going to become extinct – as a result of all of this. We did a study looking at 210 different species of copods (the dominant plankton in the North Atlantic) in the 1960s we looked at one of the warmer groups, which in the past didn’t get to the southern tip of Ireland, and now its spreading all the way into the Norwegian sea, and it’s continuing to go further north – and it has moved at the rate of about 1000km in 50 years, displacing other species.

Can we consider ocean acidification?
Ocean acidification is a further consequence of rising levels of CO2 in the atmosphere changing the pH of the seawater. The pH is dropping at an amazingly rapid rate so that in 100 years time we’re almost certainly going to be at levels that are less than anything we’ve seen in 20 million years. This means that coral reefs are going to be very severely impacted and there will be possible effects on many organisms in the plankton that have calcareous body parts. Also the physiology of other plankton will be affected because they need to adapt their body to the changing pH.

Which again will have a huge knock on effect?
It will affect everything. Just think of the larvae of all bivalves – mussels and oysters, for example, have calcareous body parts to them and if they are impacted a major resource which is worth millions of pounds globally could be very seriously affected.

What can we do? What can the concerned individual do that can make any difference? Because I think one has to have the feeling of some sense of empowerment to have the energy to carry this thing on.
I think that the committed person has firstly to become better informed, and to try and inform the media and influence the media so that they are reporting fact rather than hype which is what they tend to do at the moment, because the public will always listen to the media. Until we can get the media onside to recognise that in the next 100 years we’ve got probably the biggest potential impact on human society that’s ever happened.

Are you optimistic or pessimistic about the prospects for global society?
I’m pessimistic in the immediate future because I don’t think our politicians are taking note of the seriousness of the situation and I think we’ve got too many sceptics who are creating a stir and putting doubts in other people’s minds. It’s very easy to say there isn’t a problem, but when you look at the picture which I think I’ve got for the whole world then I don’t think there’s any doubt at all.

So in the short term I think the situation is not a good one. In the longer term I think that man is extremely ingenious – when we had our backs to the wall in the Second World War we were hugely inventive and we overcame the problems and I think we’re capable of doing it again.

What do you think is the strategy to diffuse the energy in what climate-change deniers are doing? Because there’s no question that they are having an impact.
There’s no doubt at all that they’re having an impact. We need more leadership in the scientific community to be able to get our message over in simple language. And we need to have people out there who are good speakers and who can tell people what is happening.

So to answer your question I think we need to find some good speakers and people who can get their message in to the media. It’s overcoming this block in the media and getting it into papers and into TV because that’s what’s influencing people.

What do you think is the role for ESD in terms of doing something to grapple with this issue?
We’ve got an aging population in the UK who are going to be a really important group in politics in the future – we need to get a message over to them. We need to get it over to young people as well and to young children in schools, because they are the people who are going to inherit this. So education at all levels is absolutely crucial – getting this message over of climate change – and crucially encourage children especially into science and engineering because that’s where we’re going to find the solution.

You can get a copy of the full interview by contacting us here.
The Marine Biological Association is here