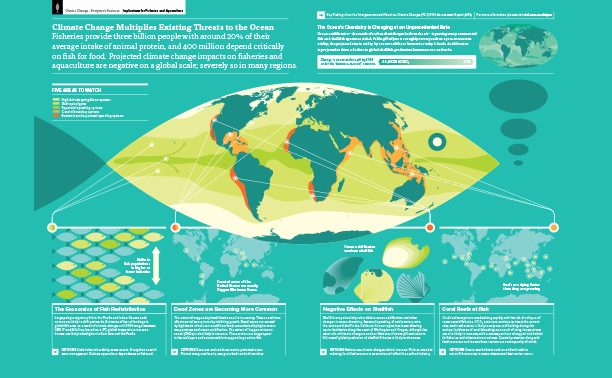 Climate change could cost global fisheries as much as $41 billion by 2050, due to loss of landings, according to a new report.

The report is based on the fifth assessment of the Intergovernmental Panel on Climate Change. It distills the assessment’s findings related to marine resources and outlines the challenges facing fisheries and aquaculture.

Among the predicted effects are fluctuating fishery yields with fisheries in the high latitudes increasing as much as 70 percent while those in the tropics could see a reduction of 60 percent. Physical and chemical changes to the ocean could lead to a loss of marine biodiversity, and algal blooms could threaten more ecosystems. Some fish stocks could die out.

The report also includes a few possible positive effects, such as new growing areas for aquaculture thanks to decreases in ice cover. But overall, it is grim, acknowledging that adaptation to climate change, while possible, is also difficult and expensive for the fishing industry.

“A certain level of impacts is inevitable, due to the effect of GHGs already in the atmosphere. However, the further and faster that climate change is allowed to progress, the greater the cumulative impacts will be on the fisheries and aquaculture industries,” reads the report, which was published by the Sustainable Fisheries Partnership along with the University of Cambridge’s Institute for Sustainability Leadership and Judge Business School.

Adaptation to some of the impacts “may be possible in the short term, through improved policies and management and better monitoring systems,” officials wrote.

The report recommends vulnerability assessments for fisheries and aquaculture operations, strengthened management of coastal zones, and the creation of new habitats such as artificial reefs.