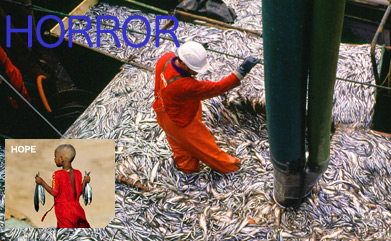 By 1995, nine of the world’s 17 major fishing grounds were in precipitous decline and four had been commercially ‘fished out’. The EU began to decommission 40% of its fishing fleet, the Malaysian government halved the number of inshore fishers and Canada laid off 35,000 people in the industry.

The situation has hardly improved since then, with many of the world’s fisheries on the verge of collapse. Blue-fin Tuna and Atlantic Cod have joined the endangered species list, while other white fish like the deep-water orange roughy, which only spawns after the age of 30 and takes decades to build up stocks, are now being fished as a cod substitute.

Over-fishing creates a vicious circle, yielding major returns to start with, but depleting resources in the long-term since it removes the spawning stock. After three years, a fishery which catches 90% in the first year returns the same as one that had caught only 30%. By the following year, the intensive fishery catches 30% less than the sustainable one, since it has removed a substantial portion of the spawning stock.

Two million gallons of radioactive liquid are discharged from Sellafield every day. The incidence of leukaemia in the area is ten times the national average.

A Greenpeace study reveals that the bed of the Irish Sea is so seriously contaminated by BNFL‘s Sellafield plant that it should be classified as nuclear waste.

It takes an average of 5lbs of wild fish to feed and produce 1lb of farmed salmon.

In the last few decades, 35 million acres of coral reefs have been destroyed by human activities. Practices like dynamite fishing have degraded 10% of the world’s reefs and, at current rates, this could rise to 70% during our lifetime.

Due to different fishing techniques, the ‘by-catch’ created by saving one dolphin for the yellow-fin tuna labelled as ‘dolphin-friendly’ can include up to 16,000 discarded small tunas, 380 mahi-mahi, 190 wahoo, 20 sharks and rays, one marlin and up to 1,200 smaller fish.