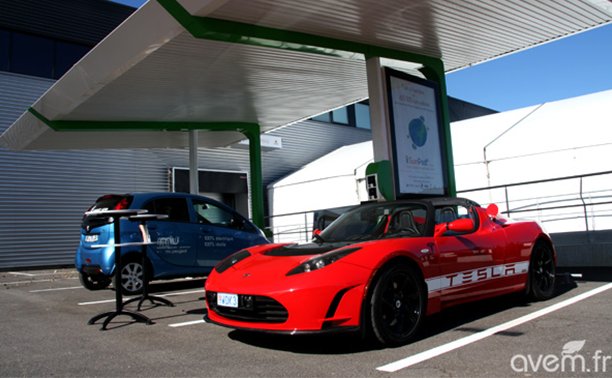 A French company is potentially making the roll-out of electric mobility in European cities easier by offering a suite of “SunPods”, or vehicle recharging points powered by solar energy. In doing so, the company, Nice-based ADVANSOLAR, is building on recent developments that have been seen especially in the United States, where the installation of carports or parking canopies featuring solar panels has grown rapidly: installed capacity of solar panels on carports in the US exceeded 100 megawatts each year from 2011 to 2013, equivalent to enough power for about 20,000 homes.

The ADVANSOLAR SunPod Auto is designed to cover four parking spaces. It consists of a sloping roof structure covered with solar panels with charging points either side of two supports. It is capable of generating 9,000 kilowatt hours of electricity per year – enough, says ADVANSOLAR sales director Christophe Lephilibert to enable four electric vehicles to each drive 12,000 kilometres.

The SunPod Auto is one of a number of solar charging stations for electric vehicles that are available. In Europe, deployment of the carports has been limited, but in the US, California in particular has adopted rules and regulations to make the installation of solar carports easier, and a number of US companies including ProtekPark Solar and Envision Solar have deployed the carports at company, public institution and residential sites. Ford, meanwhile, is working on solar panels for the roof of its C-Max Energi hybrid car. The car would park under a “solar concentrator,” and charge its battery directly without the need to plug into the grid. So far, however, the system is only able to provide a limited charge to the C-Max Energi.

ADVANSOLAR also offers the SunPod XL for larger parking areas, the SunPod Cyclo for electric bicycles, and the SunPod Nomad, a small and portable “green power island,” according to ADVANSOLAR, from which laptops and mobile phones can be charged. SunPods also include built-in advertising panels from which buyers can generate revenues, in addition to electricity savings.

ADVANSOLAR installed its first SunPod® Auto in the south-eastern French town of Pégomas in October 2011. Since then, says Lephilibert, “We are already selling the full range of solutions in France, to customers like Veolia Water or Schneider Electric.” Potential customers outside France are also starting to get interested.

Lephilibert says that the main market for now is companies, which might want to install SunPod stations on their premises, to charge their growing fleets of electric vehicles. There will also be opportunities as municipalities look for options when installing electric vehicle charging points. “If we look at the infrastructure side, it is foreseen that we will go from approximately 40,000 charging points today to close to 300,000 in 2020 on the European level. So the potential is huge,” Lephilibert says.