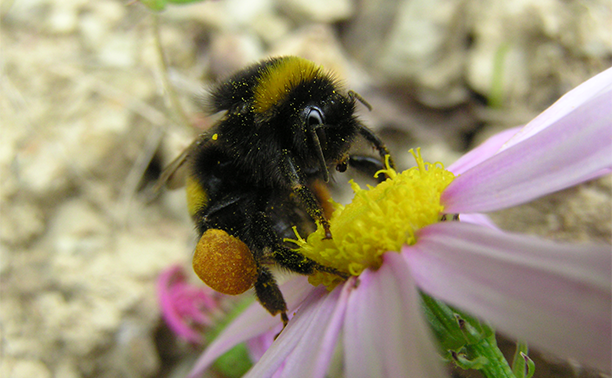 The value of insect pollinators cannot be underestimated. They are essential for the production of many crops and help improve yields and quality. However, there is a worrying decline in the numbers of pollinators and it is increasingly recognised that management of the agricultural landscape is crucial to conserving these insects and the services they provide.

This is the first study to investigate the effects of growing mass-flowering crops at different times of the year. Carried out as part of the EU-funded STEP project, the researchers counted the number of bumblebees, hoverflies and honeybees they saw during surveys of 16 sunflower fields in Bavaria, Germany, during July and August 2011.

The study site is intensively farmed and includes oilseed rape, which flowers from late April until early June, and sunflowers, which flower in July and August. The researchers estimated the area covered by oilseed rape, sunflowers and semi-natural habitats (mainly grasslands, forest edges, hedgerows, fallow land and orchard meadows) within a 2 km radius around the sunflower fields. Pollinators were expected to use this area for foraging and nesting.

Overall, the researchers found that having early-flowering oilseed rape in the landscape boosted the numbers of bumblebees found in the later-flowering sunflower fields. Bumblebee numbers were highest in sunflower crops where the landscape included both relatively large areas of oilseed rape (more than 7.5% of the land) and semi-natural habitats (more than 6% of the land). The latter are important because they provide nesting sites and a continuous supply of food for bumblebee colonies. This combination of food and breeding habitats boosts the early establishment of bumblebee colonies.

However, bumblebee numbers were lower in areas where the sunflower fields covered a large proportion of the landscape in relation to oilseed rape cover. As the area covered by sunflowers increased relative to oilseed rape, the numbers of bumblebees per unit area of sunflowers fell. This reduced density or ‘dilution’ of bumblebees can affect pollination services and, potentially, crop yields.

This suggests that flowering crops grown earlier can reduce the dilution effect on bumblebee numbers that sometimes occurs when large areas of mass-flowering crops are grown later in the season.

This positive feedback between oilseed rape, semi-natural habitats and sunflowers was not seen for hoverflies or honeybees. For hoverflies this may be because they can disperse more widely than bumblebees and can find alternative nesting sites when the oilseed rape crops are harvested. For honey bees it could be because they depend more on beekeeping activities than on the landscape itself.

Overall, these results suggest that bumblebees and the pollination services they provide could benefit from careful management of early and late mass-flowering crops in the landscape.