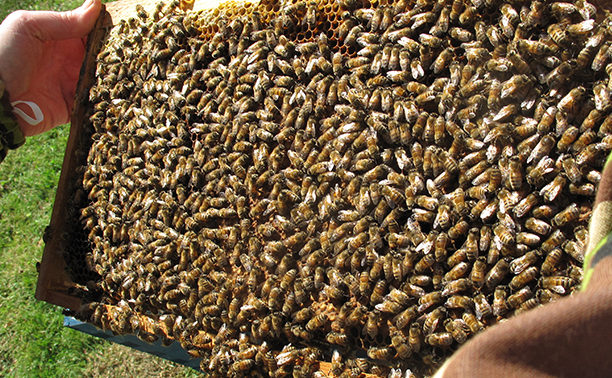 Bee pollination improves the shape, weight and shelf-life of strawberries, contributing a staggering €1.05 billion to the European strawberry market per year, new research suggests. By blocking bees from a set of plants, the researchers demonstrated the substantial effects of bee pollination on the quality of the fruit.

It is well established that insect pollination increases the quantity of many crop species. In fact, 75% of the world’s major crops are dependent on, or benefit from, the ecosystem service of pollination by insects and other animals. However, little work has been done on whether pollination affects the quality of such crops.

In this study, researchers set out to examine how insect pollination affects not only the quantity but also quality and market value of an important commercial crop, strawberries. They used an experimental field in Göttingen, Germany, planted with nine commercially-available strawberry varieties and surrounded by five honeybee (Apis mellifera) hives and 300 groups of nests of the solitary wild bee, Osmia bicornis. Samples of pollinators on strawberry flowers showed that almost all (98.5%) were bees, and of these, the majority were wild bees (64.6%), with Osmia bicornis the most abundant pollinator.

The results showed that bee pollination improved the shape and weight of the strawberries, dramatically increasing their commercial value by 38.6%, compared to wind pollination alone, and by 54.3%, compared to self pollination. When this improvement is applied to all 1.5 million tonnes of strawberries sold in Europe in 2009, this translates to a monetary value of US$1.12 billion (€0.82 billion).

Furthermore, this is an underestimate, because the researchers also discovered that the bee-pollinated berries were firmer and therefore had a longer shelf life. After four days in storage, none of the self-pollinated berries were marketable and only 29.4% of the wind-pollinated sample could be sold. However, 40.4% of the bee-pollinated strawberries were still of a good enough quality for sale. This additional service adds another US$0.32 billion (€0.23 billion) meaning that, in total, bee pollination contributed US$1.44 billion (€1.05 billion) out of the total value of US$2.9 billion (€2.12 billion) of strawberries sold in Europe in 2009.

Importantly, the researchers were also able to show that these effects on quality are likely to be true for a number of other fruits and vegetables. They showed that the fertilisation rates of seeds were higher for bee-pollinated strawberries, which in turn stimulates the release of plant hormones that affect fruit quality. As similar hormones are known to also affect quality in a variety of other species, these results may hold true for many different crops.

The study’s authors conclude that the value of bee pollination is likely to be even greater than thought. In light of this study, the grave socio-economic and biological consequences of the global decline of bees should not be underestimated.