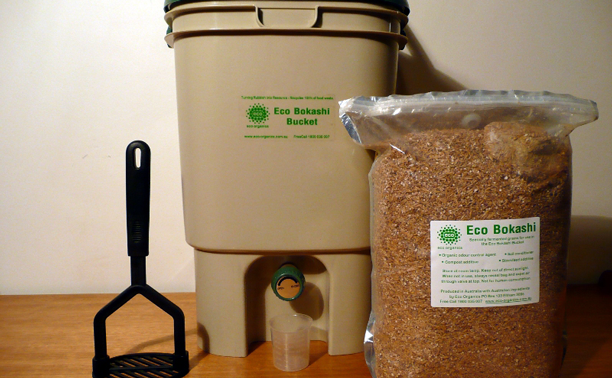 The Bokashi system is one of the most effective natural ways of diverting food waste from landfill, and is already commonplace in Japanese schools and homes.

“Bokashi is a method that uses a mix of microorganisms to cover food waste to decrease smell. It derives from the practice of Japanese farmers centuries ago of covering food waste with rich, local soil that contained the microorganisms that would ferment the waste. After a few weeks, they would bury the waste that weeks later, would become soil.” (wikipedia)

This unique recycling system uses a Bokashi solution – a wheat bran formula containing all-important Effective Micro-organisms (EM1) – a mixture of lactic acid bacteria (LAB), yeast and phototrophic (PNSB) bacteria –  to ferment food waste inside a sealed container. This means no rodents, no insects, no spoiling, and no odour. The end result is a pickled mass of food waste which, when placed in a garden, breaks down into rich humus within a matter of days, releasing nutrients, microbes and structure to the soil.

Unlike other forms of recycling, such as composting and worm farming, there is no food waste you cannot use since the Bokashi system treats paper, citrus, onions, dairy and even meat. The liquid that collects in the bottom of the bucket even provides a nature-enhancing drain cleaner and in Japan has been shown to have a benign effect on rivers.