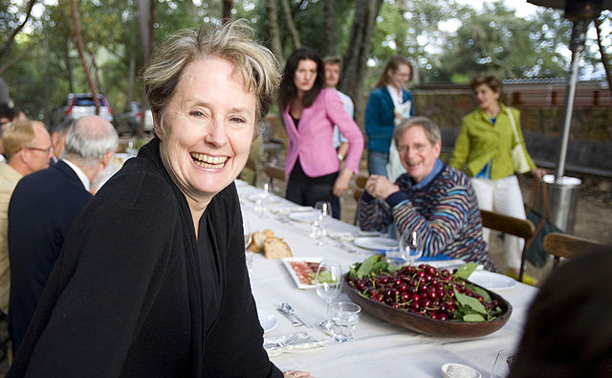 When I went to school in the UK in the 1960’s the school environment was very different. At primary school every class had a ‘nature table’ that had all sorts of oddments, from privet clippings to a sheep’s horn and seasonal treats like frog spawn and old man’s beard (seeds of the wild clematis).

At secondary school there was a school garden, where simple domestic crops were grown: herbs, roots, brassicae, legumes.

Significantly, by the time my schooling came to an end the school garden was moribund. No-one bothered any more, and the move away from homes with vegetable gardens was growing. Soon only the few grew any domestic food crops, the back gardens paved or grassed over.

This disconnection from the land and the rhythms of the seasons is viewed by some as a spiritual sickness, and the disappearance of real food by others as a material cause of ill-health and a general lack of well-being.

It is in this context that the first Edible Schoolyard was set up at Martin Luther King, Jr. Middle School in Berkeley, California.

As the Edible Schoolyard website explains, “Seventeen years ago, Alice Waters was quoted in a local newspaper, claiming that the school she passed every day looked like no one cared about it. Neil Smith, then principal of Martin Luther King, Jr. Middle School, contacted Alice with the acre of blighted land on the school’s grounds firmly in mind. He wanted her to see the school and perhaps find a way to help. It was clear to Alice: she wanted to start a garden and build a teaching kitchen that could become tools for enriching the curriculum and life of the school community. Neil and Alice met with the faculty and the idea slowly began to take form. Teachers Phoebe Tanner and Beth Sonnenberg envisaged teaching fractions in the kitchen as a way of making math interactive, and growing heirloom grains in the garden as a way of teaching early civilizations. Parent volunteer Beebo Turman motivated the community, which, in turn, invited family and friends to begin the transformation from asphalt to an Edible Schoolyard.

Recognizing the potential of the idea, Zenobia Barlow and the Center for Ecoliteracy provided funding for the Edible Schoolyard Berkeley’s (ESY Berkeley) first full-time garden director, David Hawkins. Within two years, more than an acre of asphalt was cleared, a cover crop was planted, and David and his first group of students spent the summer in the garden “building the bones.”

Since then the Edible Schoolyard Project has taken root in the US and has notable outposts in Europe, Australia, Brazil, South Africa and Indonesia.

Notable exemplars include the Edible Schoolyards in New Orleans and New York City, whilst similar programmes are gaining traction in the UK and Sweden.