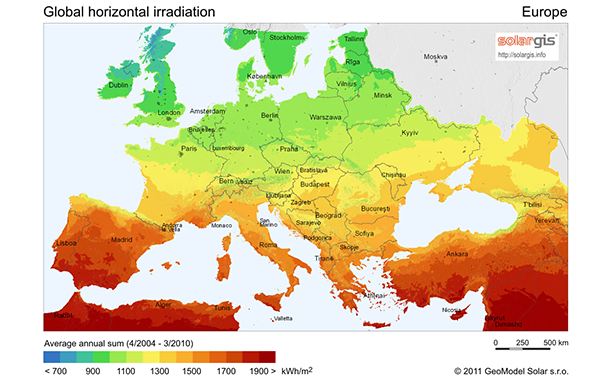 Solar energy cheapest of all

By 2025, solar power in sunny regions of the world will be cheaper than power from coal or gas / Success depends on stable regulatory conditions

In a few years, solar energy plants will deliver the most inexpensive power available in many parts of the world. By 2025, the cost of producing power in central and southern Europe will have declined to between 4 and 6 cents per kilowatt hour, and by 2050 to as low as 2 to 4 cents, according to a study by the Fraunhofer Institute for Solar Energy Systems commissioned by Agora Energiewende. Agora Energiewende is an independent German think tank dedicated to research on the future of the electrical power system. The study uses only conservative assumptions about technological developments expected for solar energy. Technological breakthroughs could make electricity even cheaper, but these potential developments were not taken into consideration.

Solar power is already cost-effective: In the sunny, desert country of Dubai, a long-term power purchase contract was signed recently for 5 cents per kilowatt hour, while in Germany large solar plants deliver power for less than 9 cents. By comparison, electricity from new coal and gas-fired plants costs between 5 and 10 cents per kilowatt hour and from nuclear plants as much as 11 cents.

“The study shows that solar energy has become cheaper much more quickly than most experts had predicted and will continue to do so,” says Dr. Patrick Graichen, Director of the Agora Energiewende. “Plans for future power supply systems should therefore be revised worldwide. Until now, most of them only anticipate a small share of solar power in the mix. In view of the extremely favourable costs, solar power will on the contrary play a prominent role, together with wind energy – also, and most importantly, as a cheap way of contributing to international climate protection.”

The study also reveals that electricity generation costs for solar power are highly dependent on financial and regulatory frameworks, due to the high capital intensity of photovoltaic installations.  Poor regulation and high risk-premiums reflected in interest rates can raise the cost of solar plants by up to 50 percent. This effect is so great, that it can even outweigh the advantage offered by greater amounts of sunshine. Graichen says: “Favourable financing conditions and stable legal frameworks are therefore vital conditions for cheap, clean solar electricity. It is up to policy makers to create and maintain these conditions.”

With a staff of above 1300, Fraunhofer ISE is the largest solar energy research institute in Europe. The work at the Institute ranges from the investigation of scientific and technological fundamentals for solar energy applications, through the development of production technology and prototypes, to the construction of demonstration systems.