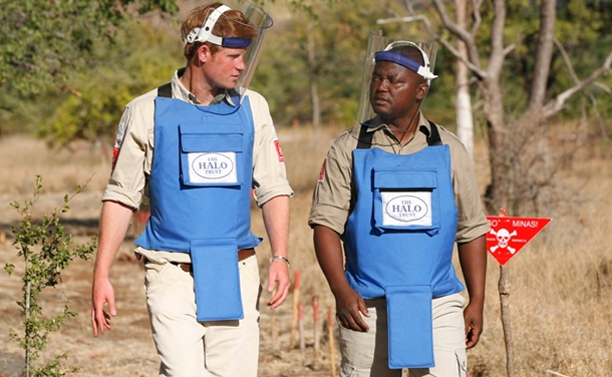 Prince Harry has become patron of the HALO Trust’s 25th Anniversary Appeal in support of the pioneering charity’s commitment to getting mines out of the ground, for good.

The HALO Trust clears landmines and unexploded ordnance from war-torn countries so that some of the world’s most vulnerable people can plant their crops, rebuild their homes and raise their families in safety.

Prince Harry has had a long-standing connection with the charity and visited minefields in Tete province Mozambique in 2010 where he met amputees, seeing for himself the devastating impact that landmines have on some of the poorest people in mine-affected communities.  During his trip to Mozambique he spent time with a team of HALO deminers, and was shown the painstaking and disciplined process of humanitarian demining.  Under supervision, Prince Harry detonated several mines.

The late Princess Diana visited minefields being cleared by HALO in Angola just before her death in 1997, drawing the world’s attention to the horrific legacy of landmines.

Since 1988 The HALO Trust has found and destroyed  more than 1.4 million landmines and more than 11 million items of large calibre ordnance (including 195,000 cluster bombs), cleared 9800 minefields and made safe more than 433,000 acres of land.

But there is still a huge job to be done, so in its 25th year the HALO Trust will be continuing to raise awareness to fund training, equipment and resources to get landmines out of the ground.

Guy Willoughby, HALO’s CEO, said “Many people don’t realise that wars might be over, but people are still being killed and maimed by landmines every day – there were more than 4000 victims of landmines in 2011.   Prince Harry’s invaluable support in our 25th anniversary year will help us to raise awareness of this important issue so that we can raise funds to recruit and train more deminers to get more landmines out of the ground more quickly.”

A St James’s Palace spokesperson said, “Prince Harry takes a keen and active interest in HALO’s work and is delighted to support the charity in its 25th year.”