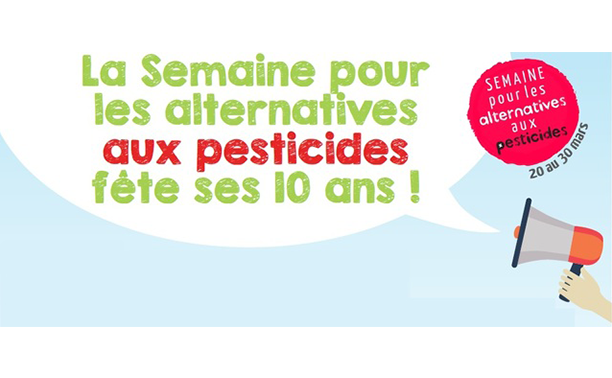 The Pesticide Action Week is an annual and international event, open to everyone, with the aim to promote alternatives to pesticides. The campaign takes place during the  first ten days of every spring when the spreading of pesticides usually resumes.

The public is invited to get better informed about the health and environmental challenges caused by pesticides and learn more about possible alternatives to pesticides by taking part in one of the hundreds of organised activities: conferences, panel discussions, film shows, workshops, open days at organic farms, information stands, exhibitions, shows…

The goals of the event are:

After the success of the 9th Action Week with more than 1 300 actions in 26 different countries, the Pesticide action week will be back with its 10th edition from March 20th to March 30th2015. You can download the new call to participate and spread it through your networks in order to let more organizations and people know about the event and encourage them to join the Pesticide action week by organizing an event. The website contains a huge variety of downloads and other materials to support an event.

The call to participate is also available in both French and Spanish in case you need it in those languages.

So get ready and join us for the next edition! The 10th edition of the Pesticide Action Week will take place from 20thto 30th March  2015.

Initiated in 2006 by the French organisation Générations Futures, this event currently takes place in more than 16 countries worldwide. Every year the event gets bigger and  stronger in Europe and globally.

In 2014, this event represented nearly a thousand grassroots events in more than 27 countries worldwide: