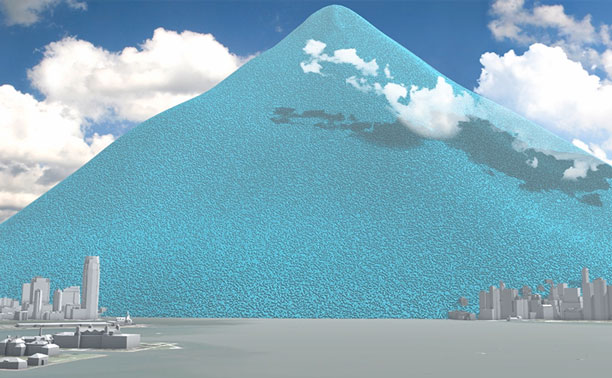 As New York begins to clear up after the devastation of Superstorm Sandy, our friends at Carbon Visuals, by coincidence, have released a film depicting the yearly carbon emissions of NYC:

Maybe it’s worth thinking a little about the link between CO2 and climate change. What do we know right now?

Global warming is a fact. The trend-line over the last 200 years is indisputable. And the correlation between the rise in the planet’s mean temperature and rising atmospheric CO2 is also indisputable.

So the next question to ask is, does global warming contribute to climate change? Again, the science is pretty clear. Warmer seas and warmer air hold more energy, and that translates directly into larger, more ferocious (more energetic) storms.

Is the rise in CO2  anthropogenic (caused by human activity)? Most scientists would say it was. According to the Union of Concerned Scientists, ” there is now an overwhelming scientific consensus that global warming is indeed happening and humans are contributing to it“.

Is Superstorm Sandy an example of the effects climate change? It’s impossible to say, but the storm is in line with predictions about the effects of climate change. More persuasive is the fact that there are more of these powerful cyclones, hurricanes and typhoons occurring now than in the past.

With over 40 dead, homes destroyed, businesses closed, transportation and communications disrupted, the debate becomes more than academic. Our hearts go out to those who have been affected by Sandy. If there’s a chance we can do something to slow down global warming and make these superstorms less likely, shouldn’t we take it?