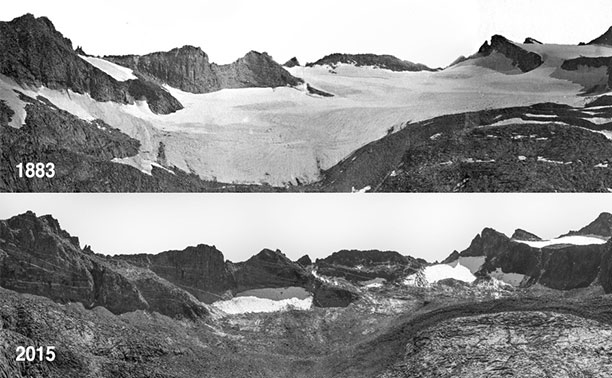 NASA’s Global Climate Change website provides evidence of a changing planet.  Among the multiplicity of articles, graphics and multimedia is a series of revealing before-and-after pictures.  Begun in 2009 and taken by satellite and aircraft technology, the agency’s  Images of Change project provides side-by-side photos of the same place over time to document the environment changes that have happened through natural and man-made causes.

For example, land is visibly red and scorched after a lightning fire burned more than 14,000 acres of forest in Colorado in 2012.  Engineering has led to a new dam in Pakistan and a growing land mass in Singapore.  The massive population growth in Las Vegas, Nevada can be seen through undeveloped land in 1972 through expansion in 1992 to concentrated habitation in 2013.  Though many examples show the restorative powers of the Earth, such as land regeneration after a massive volcano eruption in Washington State, numerous images show the detrimental effects of climate change and global warming.  Melted glaciers and ice can be seen all over the world including Alaska, Greenland, and Tanzania while drought has shrunk Lake Chad to about one-twentieth its size from the 1960s and has also affected areas in California, central Asia, and Iran.

Another video shows an animation of five-year global temperature anomalies from 1880 to 2015:

Produced by the Earth Science Communications Team at NASA’s Jet Propulsion Laboratory | California Institute of Technology, This is one of the best resources for and about climate change and global warming. I will be dipping into these resources time and again, but if you want to immerse yourself, you can go to the website and noodle your way around it.