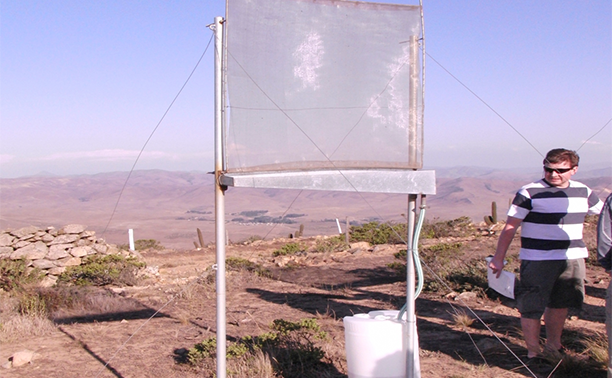 In some of this planet’s driest regions, where rainfall is rare or even nonexistent, a few specialized plants and insects have devised ingenious strategies to provide themselves with the water necessary for life: They pull it right out of the air, from fog that drifts in from warm oceans nearby.

Now researchers at MIT, working in collaboration with colleagues in Chile, are seeking to mimic that trick on a much larger scale, potentially supplying significant quantities of clean, potable water in places where there are few alternatives.

Fog harvesting, as the technique is known, is not a new idea: Systems to make use of this airborne potable water already exist in at least 17 nations. But the new research shows that their efficiency in a mild fog condition can be improved by at least fivefold, making them far more feasible and practical than existing versions.

Fog-harvesting systems generally consist of a vertical mesh, sort of like an oversized tennis net. Key to efficient harvesting of the tiny airborne droplets of fog are three basic parameters, the researchers found: the size of the filaments in those nets, the size of the holes between those filaments, and the coating applied to the filaments.

Most existing systems turn out to be far from optimal, Park says. Made of woven polyolefin mesh — a kind of plastic that is easily available and inexpensive — they tend to have filaments and holes that are much too large. As a result, they may extract only about 2 percent of the water available in a mild fog condition, whereas the new research shows that a finer mesh could extract 10 percent or more, Park says. Multiple nets deployed one behind another could then extract even more, if so desired.

While some of the organisms that harvest fog do so using solid surfaces — such as the carapace of the Namib beetle, native to the Namib desert of southern Africa — permeable mesh structures are much more effective because the wind-blown fog droplets tend to be deflected around solid surfaces, Park says. Thus, a woven mesh structure resembling a window screen turns out to be most effective. With the right chemical coating, fog droplets that form on the screen then slide down to be collected at the bottom and are funneled into buckets or tanks.

A comparison of the current standard fog-harvesting mesh material (top) and the new version designed by the MIT team (bottom), under identical conditions, demonstrates how much more rapidly water accumulates from the improved version. Video courtesy of the researchers

Video courtesy of the researchers

The researchers found that controlling the size and structure of the mesh and the physical and chemical composition of this coating was essential to increasing the fog-collecting efficiency. Detailed calculations and laboratory tests indicate that the best performance comes from a mesh made of stainless-steel filaments about three or four times the thickness of a human hair, and with a spacing of about twice that between fibers. In addition, the mesh is dip-coated, using a solution that decreases a characteristic called contact-angle hysteresis. This allows small droplets to more easily slide down into the collecting gutter as soon as they form, before the wind blows them off the surface and back into the fog stream.

While the systems currently deployed in the coastal mountains at the edge of the Atacama Desert tend to yield a few liters of drinking water per day for each square meter of mesh, the theoretical calculations show that newly designed systems operating in the strong winds and dense fogs that form along the Chilean coast at certain times of the year could yield up to 12 liters per day or more, the researchers say.

In collaboration with researchers at the Pontifical Catholic University in Santiago, Chile, the MIT researchers have recently installed a variety of test screens made of different materials on hilltops in a semi-arid region north of Santiago, an area that sees very little rainfall, but which is regularly enshrouded in a strong windblown coastal fog called camanchaca rolling in from the Pacific Ocean. The team is currently carrying out a yearlong test to study the durability and water yield of different configurations.

Maria Tou ’14, an MIT undergraduate, worked with the team in Chile, helping to install instrumentation that can observe the fluid mechanics associated with the fog droplets as they collect, grow and coalesce on the meshes.

Large mesh structures, of hundreds of square meters each, could be set up relatively inexpensively; once in place, they cost virtually nothing to operate. They consume no energy, needing only an occasional brushing to remove particles of grit and bugs. “The operating cost is essentially zero,” McKinley says, because “nature has already done the hard work of evaporating the water, desalinating it and condensing the droplets. We just have to collect it.”

Chilean investigators have estimated that if just 4 percent of the water contained in the fog could be captured, that would be sufficient to meet all of the water needs of that nation’s four northernmost regions, encompassing the entire Atacama Desert area. And with the MIT-designed system, Park points out, 10 percent of the fog moisture in the air passing through the new fog collector system can potentially be captured.

Daniel Beysens, director of the Physics and Mechanics of Heterogeneous Media Laboratory at EPSCI in Paris, who was not involved in this research, says, “This is a very important paper for anybody who wants to get water from fog. The authors have performed a thorough theoretical and experimental investigation of the influence on the final water yield of the structure of a fog net. … Their study is a breakthrough in the design of fog collectors.”

The research was supported by a Samsung scholarship, the MIT-Legatum Center for Entrepreneurship and Development, MIT’s MISTI-Chile program, and the Xerox Foundation.