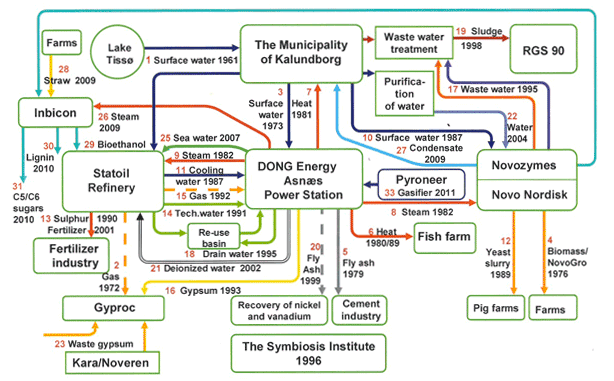 One of the prime examples of industrial ecology is the story of spontaneous but slow evolution of industrial symbiosis at Kalundborg in Denmark. This web of material and energy flows between companies and the local community began in 1961 when a project was developed and implemented to use surface water from Lake Tisso for a new oil refinery, to save the limited supplies of ground water. The City of Kalundborg took the responsibility for building the pipeline while the refinery financed it. Starting from this initial collaboration, a number of other collaborative projects were subsequently introduced and the number of partners gradually increased.

The original motivation behind most of these exchanges was to reduce costs through income-producing uses for waste products. Over time however, the managers and town residents realised that their transactions were generating systemic benefits to the environment as well.

Kalundborg Municipality is the largest industrial region outside Copenhagen and includes two of the world’s leading producers of enzyme and insulin, the largest water treatment plant in Northern Europe and the second largest oil refinery of the Baltic Region. In 2009, the world’s biggest demonstration plant of second generation bioethanol was built in Kalundborg.

Approximately 9% of Denmark’s overall CO2 emissions originate from the industries of Kalundborg Municipality, and it is committed to leading the way in global climate change remediation and to contribute proactively to the construction of sustainable energy and environmental programmes.

Kalundborg Symbiosis involves a number of working cooperatively to utilise each other’s residual or by-products commercially. In that way, production can be increased without enhancing the consumption of water, energy or other resources correspondingly – thereby maintaining production costs while benefitting the environment at the same time. The original eight members are:

10 % of Denmark’s overall electricity/power consumption is produced in Kalundborg. The outcome is an annual CO2 emission of approximately 4.3 million tonnes – half of which stems from surplus heat in production. In the industrial symbiosis, Statoil Refinery, Novo Nordisk and Novozymes purchase a part of this surplus heat as process steam to run part of their production. This exchange provides for an annual CO2 reduction of approximately 240,000 tonnes of CO2.

The overall water consumption of the industries within Kalundborg Symbiosis is approximately 10 million m3 per year for their production. Almost one third – 3 million m3 – is recycled and re-used in the symbiosis, reducing costs and putting substantially less pressure on the water supply systems.

The smoke originating from the production at Asnæs Power Station is de-sulphured before being let into the environment. The desulphurisation process is conducted using lime and recycled water, and this process creates a residual product, industrial gypsum. This gypsum – approximately 100,000 tonnes on a yearly basis – is used by Gyproc to produce plasterboards for the construction industry. In the same way, the yeast – a residual product from Novo Nordisk’s production of insulin – is used as feed for approximately 800,000 pigs every year. Slurry, stemming from the municipal water treatment plants in Kalundborg, is exploited by RGS 90 as a nutrition agent in its soil cleaning processes. Finally, Novo Nordisk and Novozymes are producing an annual 150,000 tonnes of the fertilising product, NovoGro, from their water treatment.

A new symbiosis partner is Inbicon’s bioethanol plant in Kalundborg, which takes in surplus heat from Asnæs Power Station so that the overall CO2 emissions are reduced by an extra 25,000 tonnes on a yearly basis. In the symbiosis partnership, efforts are being made to optimise the recycling of water so that up to 200,000 m3 of clean water – delivered as process steam – can be returned to Asnæs Power Station instead of being let into the sewers. Finally, the partners in Kalundborg Symbiosis are examining the potential for using alternative energy sources in production and new partnerships have been established around the extraction of biogas from wastewater