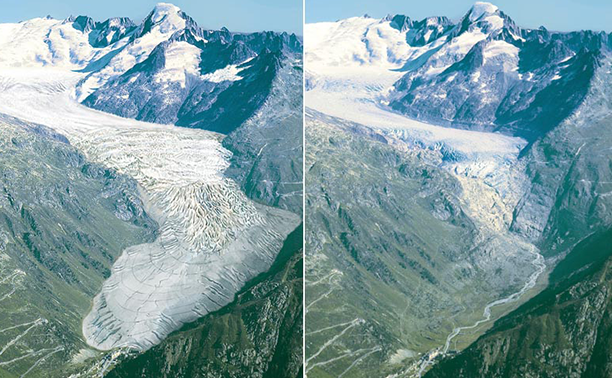 Industrial emissions of black carbon were responsible for the retreat of the glaciers in the European Alps that marked the end of the so-called ‘Little Ice Age‘, according to a new study. The researchers explain how black carbon deposits could have caused glaciers to melt more rapidly from the mid-19th century and suggest that human activities were already having a visible influence on the climate before the effects of carbon dioxide were evident.

Around 150 years ago, towards the end of the period often referred to as the Little Ice Age, glaciers in the European Alps started to shrink but their rapid retreat has never been fully explained. It was previously thought that it was the result of rising temperatures and decreasing snowfall. However, records show that temperatures were actually cooler in the Alpine region during this time than earlier in the late 18th and early 19th century, and that snowfall levels had not changed. In theory, Alpine glaciers should have continued to grow.

The mystery of the retreat of the Alpine glaciers has not yet been resolved but the authors of this new study explore one possible explanation. It is known that black carbon (BC), a component of soot which is produced by incomplete combustion of fossil fuels and biomass, has caused melting of snow in the Arctic, so the authors investigated whether BC was also responsible for this glacial retreat.

BC, which increased in atmospheric concentration from the mid-19th century due to industrialisation, is very effective at absorbing energy from sunlight. This means that when deposited, it reduces the ability of the snow covering the glacier to reflect sunlight, raising the surface temperature and speeding up melting of the snow and the ice beneath.

Researchers used Alpine ice cores dating from the 18th to 20th century to estimate the amount of additional solar energy absorbed as a result of BC, and show that industrial emissions of this air pollutant could explain why the glaciers started to retreat. Their results are consistent with climate data and glacier measurements from the time.

The researchers suggest that this new understanding shows that human influences on the Earth’s climate stretch further back than the impact of carbon dioxide emissions alone. They also say that future studies of glaciers should consider the effects of BC on snow and ice.

The study adds to a growing body of research on the effects of BC and its role in climate change. Today, one of the major human sources of the pollutant is burning of fossil fuel, including emissions from diesel engines. BC is also linked to damage to health and therefore action to reduce atmospheric levels would have direct benefits for human well-being as well as the environment.