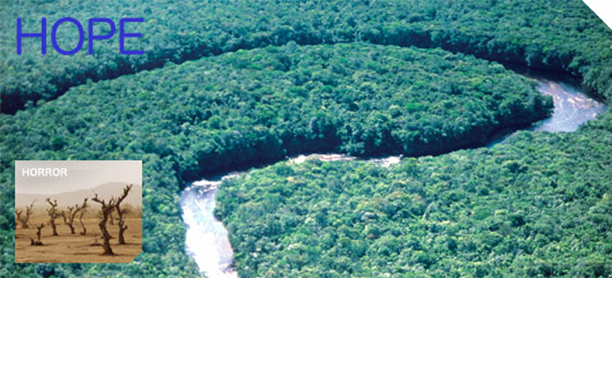 Net Primary Production (NPP) – the total photosynthetic production of the planet – is estimated to be 225 billion metric tons of wood, grass, fibre and food. The human economy utilises, consumes, converts, burns or clear-cuts 40% of NPP on land. That means that just one species out of up to 30 million is using 40% of the planet’s production. This figure is projected to be 80% by 2040.

At one stage in the late 1980s, deforestation was estimated to occur at a rate of one football field per second. A recent study by WWF puts the figure at 37 football fields per minute, about 64 acres, due to logging, land clearance and fires. Clear-cutting tropical forests devastates the entire ecosystem because between 75% and 90% of the nutrients are tied up in the biomass.

It is estimated that mankind has driven up to one million species into extinction during the last decade and that all of Africa’s wildlife will be in danger of extinction within 40 years if present rates continue.

To date, only 1.75 million life forms have been identified and named, with some 15,000 added annually. Many of the rest will disappear before we even know they exist. One in four mammal species are facing risk of extinction and one in eight birds.

A single edition of a UK newspaper requires 460 metric tons of paper or 1,384 cubic metres of roundwood. One issue therefore consumes the entire year’s pulpwood from 138 hectares of plantation, 43,000 hectares in a year, a forest 12% larger than the Isle of Wight.

There are 550 varieties of pear native to Britain, but 94% of eating pears grown in the UK are made up of just three varieties.

Some 90% of the human population now survives on just 30 crop varieties. The UK has lost 97% of its fruit and vegetable varieties since 1900, while the US has lost 97% in the last 80 years.

The Irish potato blight of 1845-46 was an example of what can happen when genetic diversity is lost. The ensuing famine left nearly one million dead, forced more than a million others to emigrate and the population of the country had dropped 23% by 1851.

According to the state government of Andhra Pradesh, Indian farmers growing Monsanto’s GM Bt-cotton made seven times less from their 2002 harvests than those growing non-GM varieties. In the state of Rajasthan, Monsanto claimed their maize yielded 50 tones per hectare – local farmers put the real figure at closer to 3 tons per hectare.