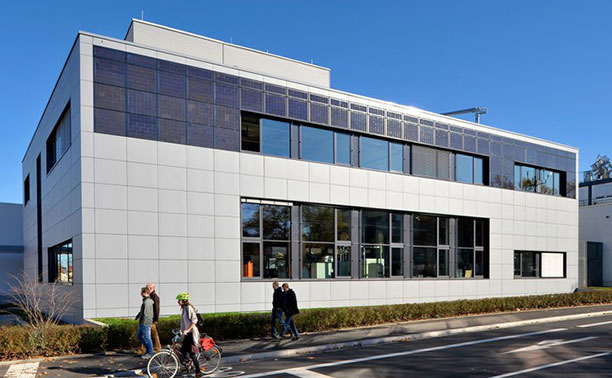 This laboratory building at Fraunhofer ISE is equipped with cold water storage and serves as a demonstrator for grid-supportive operation. ©Fraunhofer ISE

When total building performance conforms to targeted load management goals, the building is called grid-supportive, and this is how building mass and technical storage help to smooth out the fluctuations from renewable energy.

The problem of balancing electricity loads

The number of renewable energy installations continues to expand worldwide. In Germany the installed power of wind and photovoltaics increased from 54 GW in 2011 up to 83 GW in 2014/15, a value equivalent to the peak load in the German electricity grid. With an increasing share of renewables in the energy supply, times occur when there is a surplus of renewable electricity, but also when peak load power plants, fired by fossil fuels with high emissions, are needed to produce electricity. Since electricity is difficult to store, the best case is to maintain the balance between electricity production and consumption. There are several options for flexibility such as demand-side operation of conventional power plants and CHP systems; load management where consumers in households, businesses and industry are temporarily shut-down; short term storage; and, as a measure in the medium to long term, the production of synthetic chemical energy carriers (Power-to-Gas/Power-to-Liquid) using surplus renewable electricity.

“We are researching three basic approaches to increase the grid-supporting capacity of buildings,” says Dr. Doreen Kalz, group head of Building Analysis and Energy Concepts at Fraunhofer ISE. “Firstly, one can switch between different heating and cooling supplies, e. g. between an electric heat pump and a gas-fired condensing boiler. The second approach uses energy storage technologies such as battery storage or thermal heat storage. At times of surplus electricity, for example, an electric heat pump can be used to produce heat which is sent to a buffer storage tank. In the third approach, the surplus heat or cold is stored in the thermal mass of the building itself, whereby the massive building components are thermally activated by so-called “Thermally Active Building Component Systems,” or TABS.”

In order to compare the grid-supporting properties of different buildings, the researchers developed two parameters: an absolute and a relative Grid Support Coefficient (GSCabs and GSCrel). The GSCabs weighs the electricity consumption with a grid-based reference parameter, i. e. an electricity price signal. The GSCrel translates this amount to a scale of -100 (worst case) to +100 (best case) which indicates the present potential for optimization. An evaluation of 52 existing plants showed that the majority of systems today operate with either a negative or neutral impact on the grid. For two systems that were analyzed in more detail, the grid-support factor could be increased to a value of +70 by implementing a new control strategy that considers the electricity price on the EEX electricity market.

In the recent workshop at the Berlin ENERGY DAYS, the results from four years of research in the “Netzreaktive Gebäude” project (Grid-supportive buildings) was presented. The project was supported by the German Federal Ministry for Economic Affairs and Energy (BMWi). Project partners are the Fraunhofer Institute for Solar Energy Systems ISE, theFraunhofer Institute for Building Physics IBP in Kassel and the E.ON Energy Research Center of RWTH Aachen. The researchers concluded:

“To achieve grid-supportive operation, it is important to initially define one’s individual goal: for example, high revenues from electricity sales, provision of standby energy, ease the burden of the distribution grid or increase the percentage of renewables in the fulfillment of demand.”

Grid-support does not stop at buildings: Urban quarters, city districts and regions can also be of service to the grid. Ultimately grid-support is a Europe-wide issue that is being addressed by the International Energy Agency IEA. At Fraunhofer ISE, the work on this topic is being continued in the new “FlexControl” project, also sponsored by the federal ministry BMWi. The new project makes a contribution towards ensuring that a stable electricity grid and the continual growth of renewable energy capacity go hand in hand.