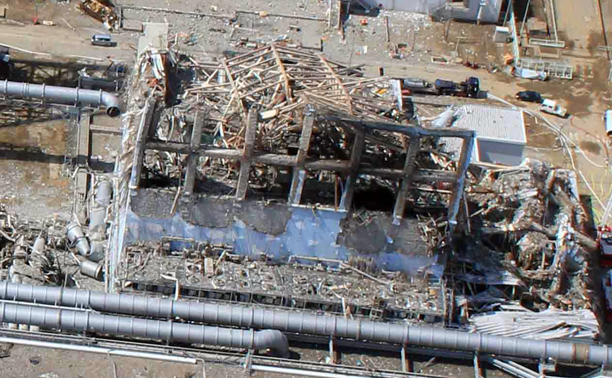 “Sometimes we have to avoid thinking about the problems life presents. Otherwhise we’d suffocate.” – from Hiroshima Mon Amour.

First, a devastating earthquake, the largest ever recorded in Japan. Then, like a destroying angel, the tsunami that made whole cities a fiction. As a bewildered people take stock, rub their eyes and see to their misfortune they are not dreaming, another potential catastrophe faces them. The nuclear plant at Fukushima.

As the story unfolds it makes a predictable arc: First, that there are problems, but contained. Second, that this is an old design, but nothing too bad is happening, the containment vessel is intact. Third, that this is no Chernobyl, and is anyway an old design, and if there has been a partial meltdown there is no real cause for worry. Lastly, it is worse than Three Mile Island, and the people of Tokyo are on standby to evacuate.

On the media, here in the UK, experts are rolled out, quick to make the case of nuclear power, pointing out that Fukushima is an old design, saying that nothing has changed, that nuclear is fundamentally safe. Interviews from UK villages in the shadow of nuclear power stations, looking picture-postcard pretty, locals opining that they are completely happy to live with a nuclear reactor in the back garden.

So why am I so uncomfortable with all this? Firstly, it’s that story arc. There’s no problem. Well, there’s a problem but it’s only small. And we don’t have earthquakes. And it’s an old design anyway…

Don’t you get the feeling that these people are not talking about the science, economics and social impact of nuclear power? That they’re arguing a position, making sure that We The People don’t question things? I do.

So you may now have guessed my basic position – I’m not at all happy about an energy source that is one of the most toxic – and long-lived – materials known to man. But that doesn’t mean I am unreservedly against nuclear power – it means I want to know as much about it as possible, and if there are any realistic alternatives. That’s what I don’t think we are getting, and so I’m going to try to find out for myself.

Firstly, what are the facts? I take the following, wholesale, from David MacKay’s excellent book, ‘Sustainable Energy – without the hot air’. He is neither pro nor anti sustainable or nuclear energy, so the hope is that he gives a balanced – and truthful – analysis. MacKay’s book concentrates on the UK, but the arguments he makes are easily applied to other countries. Let’s see what he has to say:

How much energy do we consume?

The UK average consumption of ‘primary energy’ (which means the energy contained in raw fuels, plus wind and hydroelectricity) is about 125 kWh per day per person – which happens to be the European average. (The average US citizen consumes about 250 kWh per day).

Where does the energy come from?

90% of the UK’s energy comes from fossil fuels. So if the UK is serious about change, the changes need to be seriously big.

How much can be supplied via renewables?

MacKay’s analysis is that a theoretical maximum of 180 kWh/d/p could be achieved using renewables. But that’s a long, long way from a realistic maximum – the calculation omits any and all economic, social and environmental constraints. In fact, his estimate of what Britain would get from renewables is a paltry 18kWh/d/p. This estimate I guess will be disputed, but that must wait for another follow-up post

So how can we change the energy mix?

We can change demand by:

We can change supply by:

How can we reduce demand?

The big-ticket items are:

Efficiency savings in heating and transport would save 30 kWh/d/p, but the replacement of direct fossil fuel usage in these categories with electricity would increase the electricity supply requirements, up from 18 kWh/d/p to 48kWh/d/p. This, then, is the amount of electricity that would have to be generated.

Where could the electricity come from?

Our green electricity must come from a mix of:

Remember, we are not making moral judgements at the moment, nor are we looking at what happens if things go wrong.

Nuclear power has an important property: the nuclear energy available per atom is roughly one million times bigger than the chemical energy per atom of typical fuels. This means that the amounts of fuel and waste that must be dealt with at a nuclear reactor can be up to one million times smaller than the amounts of fuel and waste at an equivalent fossil-fuel power station.

According to MacKay, the amount of electricity available from domestic renewables is 18kWh/d/p. So we’re looking for an additional 30 kWh/d/p.

This can be theoretically available via large-scale (very large scale) solar arrays in the Sahara (Libya perhaps?), but there is currently no transmission mechanism.

Or it could (also theoretically) be supplied by ‘clean’ coal. But this is currently only theory, and the capital cost – should the technology be proven – is twice that of nuclear. And it is a much less efficient power generator than nuclear or even traditional ‘dirty’ coal.

And there, in a nutshell, you have it. It just makes sense, from a particular perspective. The argument is that there simply are no practical alternatives, at this moment in time, to nuclear power as a means to resolving the energy gap and creating clean (decarbonised) energy.

These arguments are grossly simplified in order to make an indicative case, but the main thrust remains: Governments and energy policy makers like nuclear because it makes sense at the national scale.