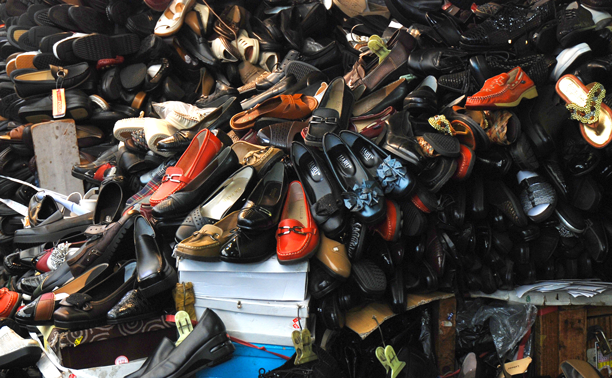 A typical pair of running shoes generates 30 pounds of carbon dioxide emissions, equivalent to keeping a 100-watt light bulb on for one week, according to a new MIT-led lifecycle assessment.

But what’s surprising to researchers isn’t the size of a shoe’s carbon footprint, but where the majority of that footprint comes from.

The researchers found that more than two-thirds of a running shoe’s carbon impact can come from manufacturing processes, with a smaller percentage arising from acquiring or extracting raw materials. This breakdown is expected for more complex products such as electronics, where the energy that goes into manufacturing fine, integrated circuits can outweigh the energy expended in processing raw materials. But for “less-advanced” products — particularly those that don’t require electronic components — the opposite is often the case.

So why does a pair of sneakers, which may seem like a relatively simple product, emit so much more carbon dioxide in its manufacturing phase?

A team led by Randolph Kirchain, principal research scientist in MIT’s Materials Systems Laboratory, and research scientist Elsa Olivetti broke down the various steps involved in both materials extraction and manufacturing of one pair of running shoes to identify hotspots of greenhouse-gas emissions. The group found that much of the carbon impact came from powering manufacturing plants: A significant portion of the world’s shoe manufacturers are located in China, where coal is the dominant source of electricity. Coal is also typically used to generate steam or run other processes in the plant itself.

A typical pair of running shoes comprises 65 discrete parts requiring more than 360 processing steps to assemble, from sewing and cutting to injection molding, foaming and heating. Olivetti, Kirchain and their colleagues found that for these small, light components such processes are energy-intensive — and therefore, carbon-intensive — compared with the energy that goes into making shoe materials, such as polyester and polyurethane.

“Understanding environmental footprint is resource intensive. The key is, you need to put your analytical effort into the areas that matter,” Kirchain says. “In general, we found that if you have a product that has a relatively high number of parts and process steps, and that is relatively light [weight], then you want to make sure you don’t overlook manufacturing.”

Kirchain and his colleagues have published their results in the Journal of Cleaner Production.

The sum of a shoe’s parts

In 2010, nearly 25 billion shoes were purchased around the world, the majority of them manufactured in China and other developing countries. As Kirchain and his co-authors write in their paper, “An industry of that scale and geographic footprint has come under great pressure regarding its social and environmental impact.”

In response, companies have started to take account of their products’ greenhouse-gas contributions, in part by measuring the amount of carbon dioxide associated with every process throughout a product’s lifecycle. One such company, ASICS, an athletic equipment company based in Japan, approached Kirchain to perform a lifecycle assessment for a running shoe manufactured in China.

The team took a “cradle-to-grave” approach, breaking down every possible greenhouse gas-emitting step: from the point at which the shoes’ raw materials are extracted to the shoes’ demise, whether burned, landfilled or recycled.

The researchers divided the shoes’ lifecycle into five major stages: materials, manufacturing, usage, transportation and end-of-life. These last three stages, they found, contributed very little to the product’s carbon footprint. For example, running shoes, unlike electronics, require very little energy to use, aside from the energy needed to infrequently wash the shoes.

The bulk of emissions, they found, came from manufacturing. While part of the manufacturing footprint is attributable to a facility’s energy source, other emissions came from processes such as foaming and injection molding of parts of a sneaker’s sole, which expend large amounts of energy in the manufacture of small, lightweight parts. As Kirchain explains it, “You have a lot of effort going into the molding of the material, but you’re only getting a very small part out of that process.”

“What stood out was this manufacturing burden being on par with materials, which we hadn’t seen in similar products,” Olivetti adds. “Part of that is because it’s a synthetic product. If we were looking at a leather shoe, it would be much more materials-driven because of the carbon intensity of leather production.”

In tallying the carbon emissions from every part of a running shoe’s lifecycle, the researchers were also able to spot places where reductions might be made. For example, they observed that manufacturing facilities tend to throw out unused material. Instead, Kirchain and his colleagues suggest recycling these scraps, as well as combining certain parts of the shoe to eliminate cutting and welding steps. Printing certain features onto a shoe, instead of affixing them as separate fabrics, would also streamline the assembly process.

Kirchain and Olivetti view their results as a guide for companies looking to evaluate the impact of similar products.

“When people are trying for streamlined approaches to [lifecycle assessments], often they put emphasis on the materials impact, which makes a lot of sense,” Olivetti says. “But we tried to identify a set of characteristics that would point you to making sure you were also looking at the manufacturing side — when it matters.”