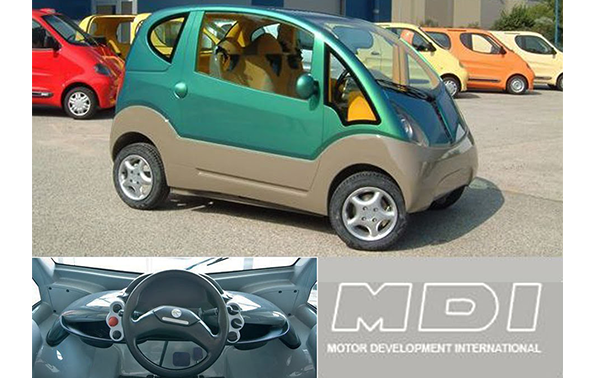 Their mission is “to bring zero pollution motoring at any speed, for any distance, to the largest number of motorists possible and, in doing so, significantly improve the quality of the air we breathe and reduce our collective carbon footprint”.

An enterprise that interests many an aspiring sustainable-lifestyler who nonetheless climbs into the car every morning, accepting that – for now – there doesn’t seem to be another option. For Motor Development International based in Carros in the Alpes-Maritimes department of France, however, the answer is here now, and it’s affordable.

MDI’s dream is “to drive pollution-free and free of fuel dependency”. Estimated prices range from €3500 (£3140) for a 3-seater One  FlowAIR, to €13000 (£11,670) for a 6-seater City FlowAIR. They’re available next year and – you’ve guessed it – they’re powered by compressed air. The developers call it “a revolutionary yet simple concept”: air is forced through an injector into the engine, where it expands, pushing down on pistons, which turn the crank shaft to power the car. Your 52 gallons of air fuel-tank takes you 93 miles, and the vehicles can be re-fuelled either by plugging into the mains for four hours, or latching onto a high pressure air pump for three minutes.

The technology has been developed by Guy Negre, a French engineer who, after spending two decades improving the efficiency of engines in the world of Formula 1 racing, decided at the end of the 80s that to “do something about saving the planet” he would invest his experience in creating a zero-carbon car. With credentials like these it’s not surprising that interest has been high, and in the last two months of 2008 alone nearly 11,000 people notified MDI of their intention to buy an Airflow when production starts. Will these cars deliver the dream: to “drive pollution-free and free of fuel dependency”?