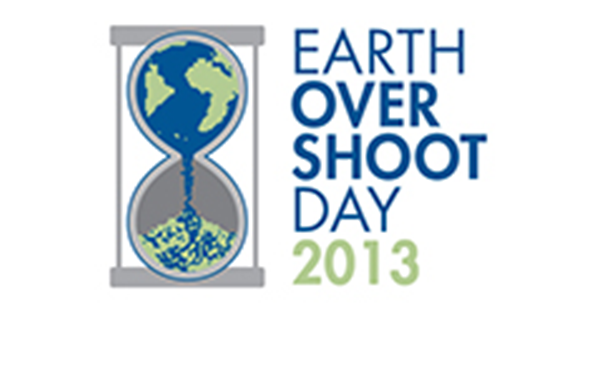 August 20 is Earth Overshoot Day, the approximate date humanity’s annual demand on nature exceeds what Earth can renew in a year. In just 7 months and 20 days, we have demanded a level of ecological resources and services — from food and raw materials to sequestering carbon dioxide from fossil fuel emissions — equivalent to what Earth can regenerate for all of 2013. Humanity has exhausted nature’s budget for the year.

For the rest of the year, we are operating in overshoot. We will maintain our ecological deficit by depleting stocks of fish, trees and other resources, and accumulating waste such as carbon dioxide in the atmosphere and oceans. As our level of consumption, or “spending,” grows, the interest we are paying on this mounting ecological debt — shrinking forests, biodiversity loss, fisheries collapse, food shortages, degraded land productivity and the build-up of carbon dioxide in our atmosphere and oceans — not only burdens the environment but also undermines our economies. Climate change — a result of greenhouse gases being emitted faster than they can be absorbed by forests and oceans — is the most widespread impact of ecological overspending.

In 1961, humanity used only about two-thirds of Earth’s available ecological resources. Back then, most countries had ecological reserves. Yet both global demand and population are increasing.  In the early 1970s, increased carbon emissions and human demand for resources began outstripping what the planet could renewably produce. We went into ecological overshoot. Global Footprint Network’s 2012 National Footprint Accounts show humanity is now using ecological resources and services at a rate it would take just over 1.5 Earths to renew. We are on track to require the resources of two Earths well before mid-century.

Not all countries demand more than their ecosystems can provide, but even the reserves of such “ecological creditors” like Brazil, Indonesia, and Sweden are shrinking over time. We can no longer sustain a widening budget gap between what nature is able to provide and how much our infrastructure, economies and lifestyles require.

It is possible to turn the tide. Ecological debtors have an incentive to reduce their resource dependence, while creditors have the economic, political and strategic motive for preserving their ecological capital. Global Footprint Network and its network of partners are working with organizations, governments and financial institutions around the globe to make decisions aligned with ecological reality. Rather than liquidating resources, it is wiser to treat them as an ongoing source of wealth.