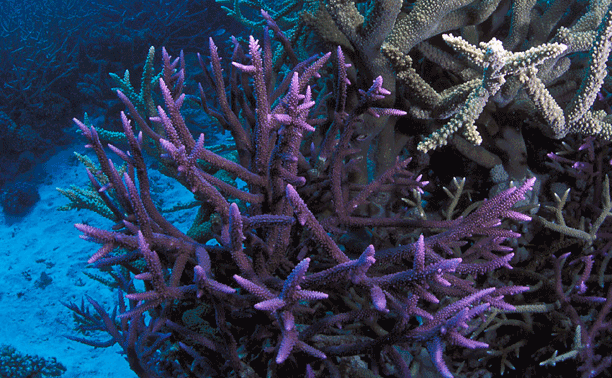 Coral reef gardening, managed by the local community, has managed to reverse the effects of dynamite fishing in parts of the Solomon Islands. Langalanga lagoon, on the central coast of Malaita, is dotted with dozens of man-made islands, built from corals taken from what used to be a very rich coral reef lagoon. Despite being illegal, dynamite fishing became one of the most common fishing methods over recent years, replacing the reefs with graveyards of broken coral skeletons. In Marau sound, the reefs are in better shape, since dynamite fishing is not often employed.

However, Acropora corals has been harvested and burnt to obtain lime, or calcium oxide, a necessary ingredient used in the habit of chewing betelnut, a mild stimulant. This practice not only destroyed important reef habitats throughout the Solomons, but has also caused ecological shifts in coral reef communities as they become devoid of Acropora (staghorn) corals. The advent of ornamental curio and aquarium coral trades resulted in additional pressure and damage to the reefs in the 1990s.

An attempt to reverse these trends was begun in 1997, with a small grant from the Pacific Development and Conservation Trust (NZ).  A partnership involving a local NGO, the Solomon Islands Development Trust (SIDT) and the Baha’i community in Malaita, focused on restoring reef areas degraded by generations of coral harvesting and dynamite fishing, aiming to provide economic alternatives to rural communities through the sale of cultured corals to the aquarium trade.

Two communities were initially trained in Malaita, and in May 1999 the Solomon Islands Development Trust arranged for an additional workshop during a follow-up visit. A no-fishing area was established around Malave Island in Langalanga Lagoon, with corals replanted into several sites. An educated population has resulted in the expansion of coral replanting to other communities and has resulted in a large reduction in dynamite fishing within Langalanga lagoon.

The work in Marau Sound initially involved training of over 30 women as coral farmers, and resulted in the export of tens of thousands of farmed aquarium corals to the USA in 1998-1999. However, these coral farms were abandoned in 1999 during the ethnic tension, when homes were burnt and the people fled. The conflict has now subsided, and the cultured corals will be used as cultured ‘seed stock’ as the coral farming and reef restoration work resumes. The education and empowerment of local communities is seen as an important step towards the coral reef rehabilitation and conservation needed regionally.