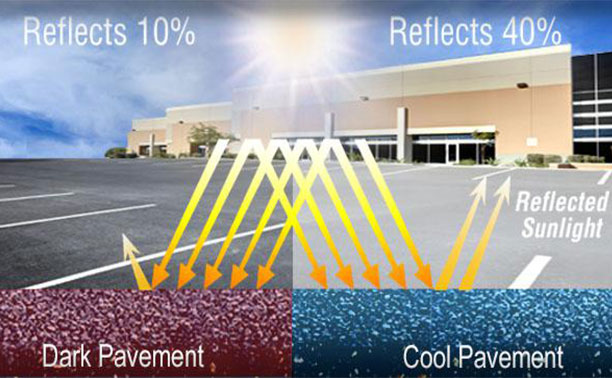 Urban Heat Island (UHI) effects, where towns and cities are warmer than surrounding rural areas, have been reviewed in new research into cool pavements, which has found that reflective pavements can reduce temperatures by up to 20°C and are more durable than evaporative pavements, which are less effective at temperature reduction but may have other benefits, such as reducing runoff.

The UHI effect is due to the materials used in the construction of urban areas, which absorb and store more heat during the daytime than rural areas, later releasing it and boosting afternoon and night-time temperatures.

The UHI effect increases summertime energy demand (due to increased use of air conditioning), air pollution and greenhouse gas emissions. It also affects human health, through heat-related illness and mortality, and can reduce water quality by raising the temperature of storm water draining in to lakes and streams (which can stress aquatic life).

With global temperature and extreme weather events like heat waves expected to increase under climate change and ever increasing urban populations, methods for reducing the UHI effect are becoming increasingly important. ‘Cool pavement’ technologies aim to reduce the UHI effect by altering the heat-storing properties of the materials used in pavements and roads.

A new study has reviewed the current landscape of cool pavement technologies, their research and use, focussing on two main categories of cool pavements: reflective and evaporative.

Reflective pavements (RP) reduce the amount of light and, therefore, heat absorbed by pavements. Reflective materials can be used to coat existing pavements or to construct entirely new ones.

Evaporative pavements (EP) use the evaporation of water to carry heat away from the pavement. These consist of a range of technologies, such as porous materials or channels for surface water. It found that RPs are better for temperature reduction, whereas EPs are more beneficial for rainy or humid conditions while RPs are more suited to arid conditions.

The review also briefly considered other technologies to mitigate the UHI effect, including heat and energy-harvesting pavements. Example technologies include embedding robust solar cells in pavements to capture solar energy or using fluids to ‘carry away’ and store heat for later use. Many such technologies are in their early stages and more research is required to understand their effectiveness, costs and durability.

The following clip is an hour-long lecture on cool roofs and pavements: