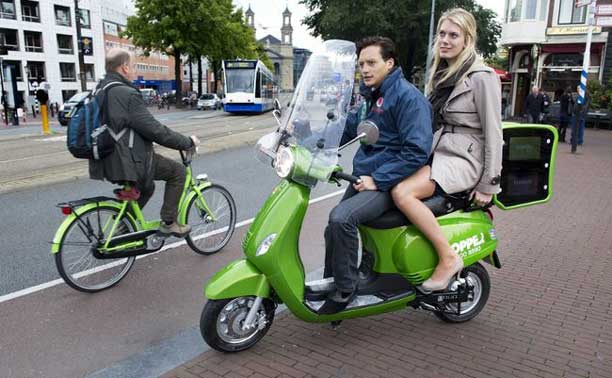 Six years ago Dutchman Ruben Beugels was on an Amsterdam tram that broke down, leaving him stuck in an out-of-the way place, and late for an appointment when he couldn’t quickly find another means of transport.

“I was very frustrated at being late, and it was then that I thought, hey a scooter would be able to get me to my meeting on time,” said Beugels, founder of Hopper, Europe’s first electric taxi scooter service.

Amsterdam’s 17th Century canals and cobbled streets make driving cars, including taxis, in the centre of the city often difficult and time consuming due to unloading trucks, congestion or road blocks, which is one of the reasons so many Amsterdamers prefer to use bicycles within the city centre.

Dutch public transport, including trams, trains and buses, is generally considered reliable and efficient, but these services, which span out like a fan from the main central train station reaching to the city’s edge, aren’t available throughout the oldest parts of Amsterdam’s city centre, which Beugels hopes will become Hopper’s new turf.

Beugels, who calls the scooters a “new form of public transport,” says they will help bridge the gap between using public transport and getting to your final destination, or that last kilometre, right to the doorstep.

The scooters are high-tech, kitted out with navigation and tracking systems by the Dutch firm TomTom and a Samsung smartphone which is locked into the dash and a tablet on the back, which is used for digital advertising.

Beugels expects the glossy lime green coloured scooters will become an urban fixture in Amsterdam and eventually in the three other biggest Dutch cities including The Hague, Rotterdam and Utrecht, where Hopper scooters will be rolled out throughout 2013.

The electric scooters drive at a maximum speed of 25 km/h and can go 130 km on a fully charged electric battery. Hopper’s main garage, replete with 100 scooters to start, crouches between TomTom HQ and Amsterdam’s central train station. The scooters are specially modified by manufacturer Novox to Hopper’s specification.