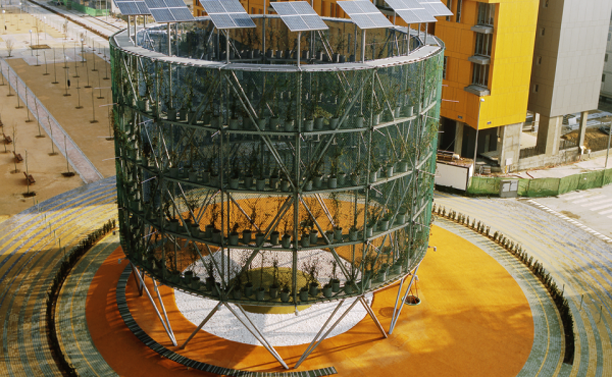 As a leading promoter of organic architecture and developer of the Usonian home concept, Frank Lloyd Wright was probably well qualified to say of trees: “The best friend of earth of man is the tree. When we use the tree respectfully and economically, we have one of the greatest resources on the earth.”

And tell it to the tree-logger, but there are more ways than one to make use of a tree. With their creation of the Air Tree, the internationally recognized Ecosistema Urbano, a group of designers, engineers and architects to whom the issue of sustainability is paramount, has done exactly that.

A competition set way back in 1994 by the Madrid Municipal Housing Corporation’s Residential Innovation Office, (which has to sound better in Spanish), led the Ecosistema Urbano team to proffer the Air Tree as the answer to a call for a “climatically transformed outdoor urban space.” In layman’s terms, they are big, kind of ugly, cooling towers. Recently constructed in the Madrid suburb of Vallecas are three cylindrical structures, of approximately 20 meters in diameter, that are covered with vegetation on either the inside, outside, or both. As a result of these conditions, a system of evaporation and condensation takes place providing a sort of air conditioning to ensure that the inside of the building is 8 to 10 degrees cooler than the hot Spanish summer on the outside. Clever.

Each Air Tree structure is crowned with a ring of solar panels, which not only generate sufficient energy to meet any power needs of the Air Trees and surrounding park area, but also allow for any excess energy generated to be sold back to the grid, funding the upkeep of the project. Also not a bad thing given that the demand for electricity in Spain is expected to rise by 3% per year, for the next ten years.

Roughly 500 meters long by 50 meters wide, the actual Eco-Boulevard site and surrounding area of Vallecas were only planned for urban development at the time of briefing. In trying to build a community from scratch, the social aspect of the brief came to play as important a part as the ecological one, asking that any proposal would  “improve environmental comfort, promote social exchange and be more sustainable than conventional models of growth in the city”. And so included in the design for one of the three Air Trees at Vallecas was a large viewing screen, as well as seating and a canopy to protect viewers from the sun and rain. And while it has yet to be determined whether popcorn (organic) will be available, we can in the meantime comfort ourselves in the knowledge that all building materials were of a recycled nature.

Good to know when one of the failures of modern urban planning is the seeming inability to encourage a sense of community or allow for places for human interaction that don’t involve spending money or expending one’s carbon footprint. Here, as the Air Tree resembles the tree, so too can the madrileño man aspire to imitate bird, as Robert Lynd pointed out: “There is nothing in which the birds differ more from man than the way in which they can build and yet leave a landscape as it was before.” However the now standing Air Trees at Vallecas can be fully dismantled and the designers intend to move them wherever they are needed in the future. So here’s to proving Mr Lynd wrong.