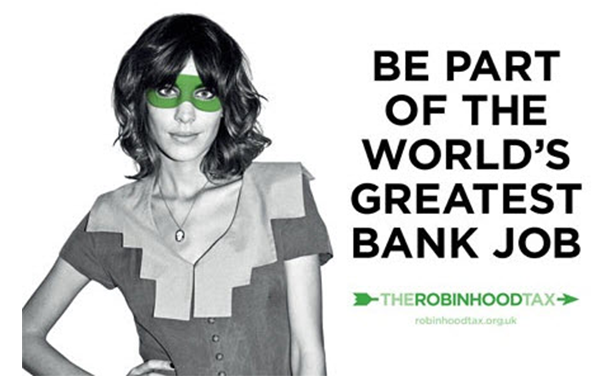 In a historical agreement, 10 states sealed the deal for the introduction of Financial Transaction Taxes (FTTs) in a heated session at the meeting of European Finance Ministers on 6 May. George Osborne bristled as the countries led by Germany and France set out that FTTs would be introduced in stages,starting with shares and some derivatives, with revenue beginning to roll in next year.

A great step forward has been secured for the Robin Hood Tax with the political agreement of the 10 countries to proceed but we still have much work to do to translate this into ‘Robin Hood’ spending to protect jobs, boost employment and improve and save lives in poorer parts of the world.

With the likes of Germany, France, Italy and Spain storming ahead, what of the UK?

Well, on 30 April the European Court of Justice threw out the UK’s legal challenge, paving the way for the following week’s historic progress. This is a major and embarrassing setback for Chancellor Osborne and a rebuke for championing the interests of the financial sector over the interests of Britain as a whole. Not only was this action ill-timed, misjudged and futile, it will also prove an expensive waste of taxpayer’s money as the Court ruled that legal costs relating to the case must be borne by the UK.

The UK Chancellor may not be on Robin’s side, but many, many others are. Even respected members of the financial sector like ex-managing director of J P Morgan, John Fullerton, have joined our cause – read his excellent article here.

Help us get to 1 million voices for the Robin Hood Tax – we have now secured 700,000 – please get 2 people you know to sign so that we can broadcast to the world’s media that the Robin Hood Tax is the most popular tax in history! With your help, we can do it!