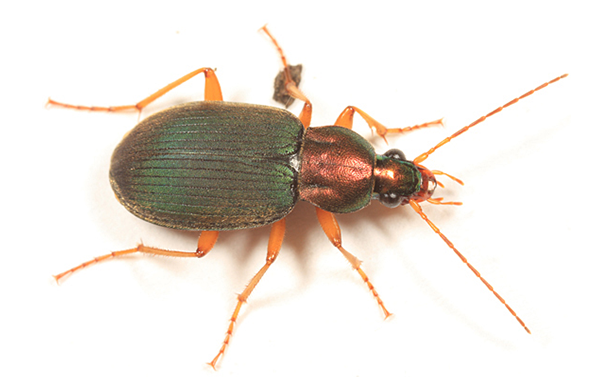 In American field trials, researchers found that plots planted with neonicotinoid-treated soybeans contained more slugs, fewer beetle predators and had 5% lower yields. The insecticide may be reducing the beetles’ effectiveness as a natural control of slug pests.

Beetles that are helpful to farmers can be poisoned if they feed on slugs that have eaten crops treated with neonicotinoids, a new study from Penn State University reports. The slugs themselves are not harmed by neonicotinoids.

Neonicotinoids, already heavily implicated in the widespread devastation of bee populations, are widely used around the world to protect crops, including soybeans and maize, from damage by insect pests. They are typically coated onto seeds and spread throughout the growing plant making it toxic to biting and sucking insects, such as grubs and aphids.

Slugs are agricultural pests that can devastate seedlings, stunt plant growth, or even kill plants, and significantly reduce crop yields. Because they are molluscs and not insects, they are not susceptible to neonicotinoids. Slugs are a particular problem in no-till farming, which avoids ploughing and so provides a stable environment and crop residues for slugs to live in. No-till farming is widely practised in the mid-Atlantic region of North America.

This study investigated the links between neonicotinoids, slugs and beetles that eat slugs through laboratory and field experiments. In the laboratory, the researchers fed slugs (Deroceras reticulatum) on soybeans that were either: untreated; treated only with fungicides; treated with both fungicides and either a low or high dose of the neonicotinoid thiamethoxam. Soybean seeds are usually coated with a neonicotinoid-fungicide combination.

They then fed the slugs to Chlaenius tricolor ground beetles, which are natural predators of the slugs. They tested the beetles to see if their motor skills had been affected by neonicotinoid poisoning.

The results revealed that the slugs were unaffected by the fungicides and the neonicotinoid. However, more than 60% of the beetles that ate slugs containing thiamethoxam died or displayed signs of poisoning, such as twitching and paralysis. The researchers say that although the thiamethoxam concentrations were relatively high compared with those found in field conditions, only one slug was fed to each beetle, making the laboratory tests fairly conservative.

In field trials on no-till land in the North American mid-Atlantic region, the researchers planted plots with either untreated soybean seeds or soybean seeds coated with the fungicides and thiamethoxam. For 35 days after planting, they monitored plant damage, slug and predator activity, and tested soil, soybean seedlings and slugs for the presence of the insecticide.

Slugs were a major problem at the experimental site. In plots planted with thiamethoxam-treated seeds, potential slug predators, mostly beetles, were reduced by 31%, compared with plots planted with untreated seeds. Nineteen per cent fewer soybean plants became established and yields were reduced by 5%. Slugs collected from the field contained neonicotinoid residues of up to 500 parts per billion.

The researchers say their work reveals that neonicotinoids can kill the predators that suppress slug populations in agricultural fields and, as a consequence, can have the unintended effect of actually lowering crop yields. They recommend that a more targeted, rather than indiscriminate, use of neonicotinoid seed treatments would improve the biological control of insect and slug pests and reduce some of the environmental effects of neonicotinoids.