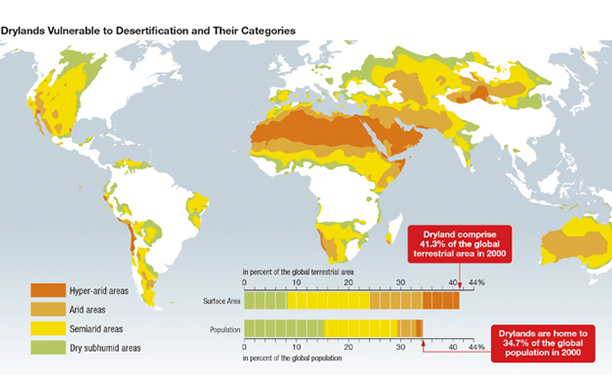 The drying of soils under global warming could disrupt the balance of nutrients in large areas of the Earth’s land surface, according to new research. The study focused on ‘drylands’ – arid areas with low levels of rainfall – which support over 38% of the world’s population. Such nutrient imbalances could diminish the provision of ecosystem services, such as food production and carbon storage, the researchers say.

Drylands cover about 41% of the Earth’s land surface and there is concern that the predicted increase in aridity under climate change could disrupt the cycles of nutrients such as carbon, nitrogen and phosphorus within the soil. To evaluate the possible extent of this disruption, this study assessed the effect of aridity on the balance of these three nutrients in soil from 224 dryland sites spanning all continents except Antarctica.

In less arid conditions phosphorus becomes available for uptake by plants and microbes through the action of enzymes in the soil that are dependent on nitrogen. In turn, the levels of nitrogen rely on good availability of carbon. Thus the cycles that mediate the levels of available phosphorus, carbon and nitrogen are coupled. However, in arid conditions there is a decoupling of these cycles, since phosphorus is no longer reliant on the levels of the other two nutrients because it is also produced by rock weathering.

This decoupling of cycles with increasing aridity leads to an imbalance in the nutrients. In the face of global warming this has implications for dryland ecosystems and the services they provide. For example, reductions in the availability of nitrogen in soil can limit plant growth, reducing the CO2 uptake and further contributing to global warming. In addition, the imbalance in nutrients may affect biodiversity by allowing some plants to out-compete others.

The research provides insight into the effect of aridity on the world’s drylands. Considering the predicted worldwide decrease of soil moisture by the end of the 21st century, this knowledge can help inform the evaluation of critical global tipping points of ecosystems and the services they provide.