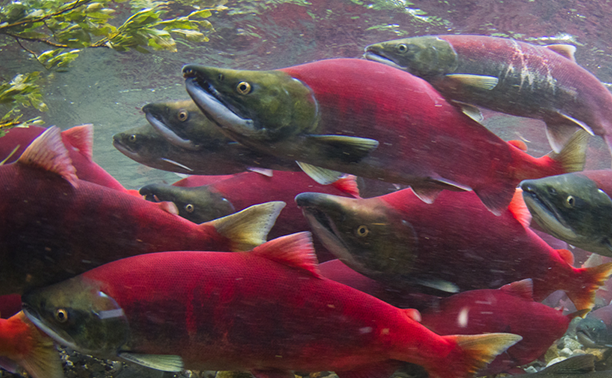 Following on from our earlier article (“large-scale mining in Bristol Bay poses risks to salmon and Alaska Native cultures”), the US Environmental Protection Agency has announced measures to protect the Bristol Bay salmon fishery from a proposed mine.

The EPA is initiating a process under the Clean Water Act to identify appropriate options to protect the world’s largest sockeye salmon fishery in Bristol Bay, Alaska from the potentially destructive impacts of the proposed Pebble Mine. The Pebble Mine has the potential to be one of the largest open pit copper mines ever developed and could threaten a salmon resource rare in its quality and productivity. During this process, the U.S. Army Corps of Engineers cannot approve a permit for the mine.

This action, requested by EPA Administrator Gina McCarthy, reflects the unique nature of the Bristol Bay watershed as one of the world’s last prolific wild salmon resources and the threat posed by the Pebble deposit, a mine unprecedented in scope and scale.

“Extensive scientific study has given us ample reason to believe that the Pebble Mine would likely have significant and irreversible negative impacts on the Bristol Bay watershed and its abundant salmon fisheries,” said EPA Administrator Gina McCarthy. “It’s why EPA is taking this step forward in our effort to ensure protection for the world’s most productive salmon fishery from the risks it faces from what could be one of the largest open pit mines on earth. This process is not something the Agency does very often, but Bristol Bay is an extraordinary and unique resource.”

“Bristol Bay is an extraordinary natural resource, home to some of the most abundant salmon producing rivers in the world. The area provides millions of dollars in jobs and food resources for Alaska Native Villages and commercial fishermen,” Dennis McLerran, EPA Regional Administrator for EPA Region 10, said. “The science EPA reviewed paints a clear picture: Large-scale copper mining of the Pebble deposit would likely result in significant and irreversible harm to the salmon and the people and industries that rely on them.”

Today’s action follows the January 2014 release of EPA’s “Assessment of Potential Mining Impacts on Salmon Ecosystems of Bristol Bay, Alaska,” a study that documents the significant ecological resources of the region and the potentially destructive impacts to salmon and other fish from potential large-scale copper mining of the Pebble Deposit. The assessment indicates that the proposed Pebble Mine would likely cause irreversible destruction of streams that support salmon and other important fish species, as well as extensive areas of wetlands, ponds and lakes.

In 2010, several Bristol Bay Alaska Native tribes requested that EPA take action under Clean Water Act Section 404(c) to protect the Bristol Bay watershed and salmon resources from development of the proposed Pebble Mine, a venture backed by Northern Dynasty Minerals. The Bristol Bay watershed is home to 31 Alaska Native Villages. Residents of the area depend on salmon as a major food resource and for their economic livelihood, with nearly all residents participating in subsistence fishing.

Bristol Bay produces nearly 50 percent of the world’s wild sockeye salmon with runs averaging 37.5 million fish each year. The salmon runs are highly productive due in large part to the exceptional water quality in streams and wetlands, which provide valuable salmon habitat.

The Bristol Bay ecosystem generates hundreds of millions of dollars in economic activity and provides employment for over 14,000 full and part-time workers. The region supports all five species of Pacific salmon found in North America: sockeye, coho, Chinook, chum, and pink. In addition, it is home to more than 20 other fish species, 190 bird species, and more than 40 terrestrial mammal species, including bears, moose, and caribou.

Based on information provided by The Pebble Partnership and Northern Dynasty Minerals, mining the Pebble deposit may involve excavation of a pit up to one mile deep and over 2.5 miles wide — the largest open pit ever constructed in North America.  Disposal of mining waste may require construction of three or more massive earthen tailings dams as high as 650 feet. The Pebble deposit is located at the headwaters of Nushagak and Kvichak rivers, which produce about half of the sockeye salmon in Bristol Bay.

For information on the EPA Bristol Bay Assessment, visit: http://www2.epa.gov/bristolbay