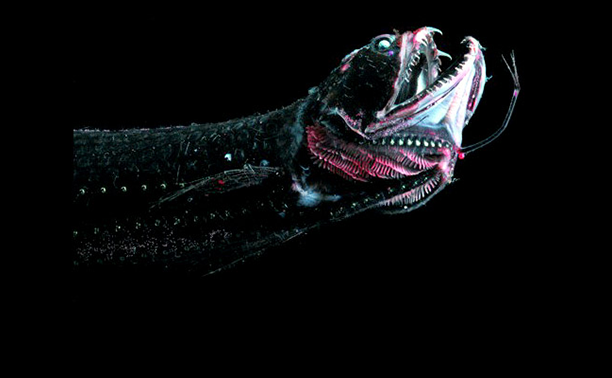 Deep-water fish living along the Irish-UK continental slope remove more than a million tonnes of CO2 from the atmosphere each year, according to a recent study. Continental slope ecosystems play an important role in carbon sequestration, which should be considered before exploiting deep-water resources, say the researchers.

Transport of carbon from the ocean surface to deep water is affected by the movements of organisms such as squid, jellyfish and animal plankton, which rise to the surface to feed at night, before returning to deeper water during the day: a phenomenon known as diurnal vertical migration (DVM). Creatures making this journey take carbon in the food they have caught at the surface back to deep waters with them.

In this study, the researchers investigated the importance of the DVM as a source of food for deep-sea fish living along the UK–Irish continental slope and assessed how this affected the transfer of carbon to the seafloor.

Deep-water trawl surveys were carried out along the Irish-UK continental slope in 2006 and 2009. Fish were caught at depths of 500, 1 000 and 1 500 and 1 800 m and the researchers classified them as feeding either on the seafloor or just above, depending on factors such as the shape of their mouths or stomach contents.

The researchers found that more than half of the fish living and feeding on or near the continental shelf at depths between 500 m and 1800 m fed on creatures that make the DVM, rather than on particles of organic matter falling to the seafloor, as had been assumed. These bottom-dwelling fish that never rise to the surface therefore store the captured carbon in the deep waters. The greatest abundance and diversity of these fish were found at mid-depths along the continental slope, between 500 and 1 800 m, because this is where most of their prey – the creatures of the DVM – can be easily caught.

Overall, bottom- and near-bottom-feeding fish remove between 350 000 and 620 000 tonnes of carbon a year from the atmosphere, which is then stored as they die and decompose on the seafloor, the researchers estimate.

Using carbon trading figures from the European Union Emissions Trading Scheme for 2014, where one tonne of carbon dioxide is valued at €6, the researchers calculated that the carbon removal service provided by these fish is worth between €8 and €14 million a year – around 10 to 50% of the value of the deep-water fishing industry on the UK-Irish continental slope.

Given that these ecosystems face increasing pressure from the expansion of fisheries, underwater mining, energy exploitation and waste disposal, the researchers urge that their value to society, including the carbon they store, be taken into account.