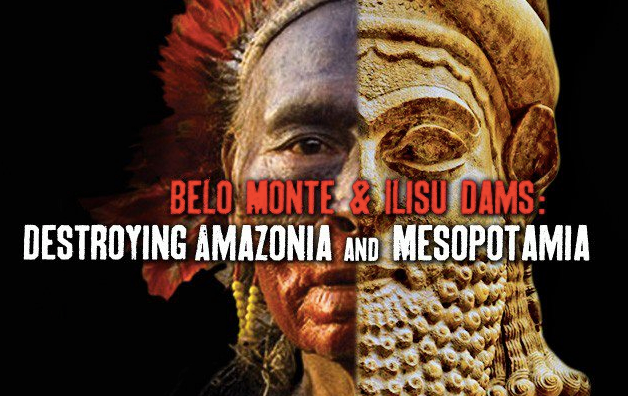 A documentary by Todd Southgate debunks the myth of large-scale dams as clean energy and a solution to climate change.

It records the priceless cultural and natural heritage the world would lose in the Amazon and Mesopotamia if two planned large-scale dams are built, Belo Monte dam in Brazil, and Ilisu dam in Turkey. DAMOCRACY is a story of resistance by the thousands of people who will be displaced, and a call to the world to support their struggle.

“Healthy rivers provide clean water essential for life on Earth. Following the Rio+20 Earth Summit’s failure to recognize the irreversible destruction of rivers and livelihoods caused by large-scale dam projects, we, civil groups have joined dam-affected communities to launch a global movement to denounce the myth of large-scale dams as clean energy and an appropriate technology for “sustainable development”.

“A global network of dam-affected and dam-threatened communities is guided by the interests of more than half a billion people impacted by the damming of rivers. Our movement aims to draw attention to the impact of large-scale dams on nature, culture and people, and prioritize healthy rivers as one of the most critical natural components for sustaining life on earth.

“As became clear during Rio+20, the interests of corporations and governments, such as Brazil and Turkey, are promoting destructive dams as “renewable energy”, as a viable component of a so-called “green economy”, and as solution to climate change. Yet, as documented through the World Commission on Dams and proven in scientific studies throughout the world, rivers — once dammed — are not easily renewed. In many cases, large hydroelectric dams fuel last century’s dirty industries redressed as “green economy” in Rio+20. National and regional reliance on hydropower poses financial and ecological risks in a changing and increasingly variable climate — while also contributing to significant emissions of greenhouse gases. As witnessed by representatives at the People’s Forum, large-scale dams continue to displace people and cause irreversible ecological and cultural destruction.

“We resolve to strengthen the movement of dam-impacted and dam-threatened peoples and their allies that recognize the planetary crises facing Earth’s rivers. Today, we draw attention to examples of destructive dams such as Belo Monte in the Amazon, Brazil, and Ilisu Dam in Mesopotamia, Turkey. These two dam projects are a clear threat to the world’s most important and renowned natural and historical assets: the Amazon, which hosts the largest collection of species in the world, and Mesopotamia, the cradle of civilization.

“We invite all civil groups that share concerns for preserving the world’s rivers as a basic source of life to join forces to further strengthen this movement.”