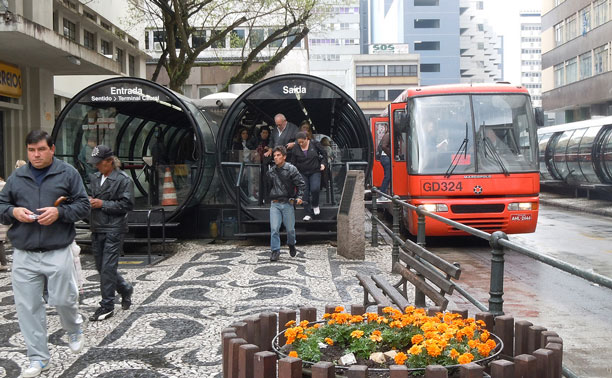 The city of Curitiba in Brazil has a population of over 2 million people and 500,000 cars. A highly efficient, reliable and well integrated transport system however, insures that 75% of commuters, some 1.3 million people, choose to travel by the ‘surface metro’ bus system, giving Curitiba the cleanest urban air of any Brazilian city.

Jaime Lerner, an architect, engineer and urban planner, became mayor of the city in 1971. Rather than treating urban problems in isolation, Lerner realised the need for a multidisciplinary and systemic approach, seeking synergistic solutions for social, environmental and economic factors issues. For example, the Green Exchange programme placed large recycling bins on the edge of the shanty town favelas, where bags of collected rubbish were swapped for food tickets, bus tokens, school notebooks and textbooks. The programme now has a 70% participation rate and the recycling alone saves the equivalent of some 1,200 trees per day.

When Lerner arrived the city was moving towards gridlock. Scrapping plans for an overpass, he pedestrianized the central boulevard and surrounding blocks, where fruit trees and flowers have replaced the cars. Five interlinked axes then formed the structure of the transport system, where double and now triple-length articulated buses collect and drop passengers in seconds from tube-shaped bus stations parallel to express bus lanes.

The whole system is entirely self-financing with a flat rate fare covering the whole city. Fares are distributed to private bus companies proportionate to the number of miles travelled, encouraging wide coverage rather than competition for passengers. The investment required for the system was about 1% of the projected cost for an underground, allowing huge amounts of money to be directed into further social improvements.